I’m normally a hardcore South Park supporter. You know the type. The people who seem personally offended when you admit to them that you missed the latest episode. “Dude, you’ve gotta watch the encore tonight, man. It works on so many levels.” Yeah, I’m that douche. But mostly I’m right. South Park is one of the best-written shows on television today and its consistent blend of topicality, irreverence and absurdity keeps it interesting after being on the air for over a decade. 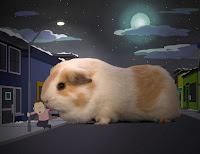 However, the recent two-part “Pandemic” episode has me a bit flustered. Well, more flustered than I usually am. Why? Because I don’t think I liked it very much. I can appreciate that it managed to tie a worldwide epidemic of pan flute bands (pandemic…get it?) to a Cloverfield parody in which giant guinea pigs ravage major cities around the globe. I even liked the inclusion of the boys’ classmate Craig, through which co-creators Trey Parker and Matt Stone seem to be mocking how absurd the show is getting in its twelfth season. A plot to raise money by forming a pan flute band leaves Craig, Stan, Kyle, Kenny and Cartman lost in the Andes Mountains. Craig provides a running commentary.

Craig is awesome. The rest of “Pandemic” and “Pandemic 2: The Startling?” Not so much. South Park works best in the realm of the bizarre, but the giant guinea pig Cloverfield spoof just wasn’t funny enough to spread over two episodes. And the plot with the boys was pretty boring, all things considered. What would have been a fine 22-minute burst of insanity became an exercise in “how far can we take this premise” and it backfired, in my opinion.

But judge for yourself. Head to SouthParkStudios.com to watch the two-parter in its entirety.

Image Courtesy of Comedy Central
Posted at 11:22 AM
Email ThisBlogThis!Share to TwitterShare to FacebookShare to Pinterest
Labels: South Park, TV