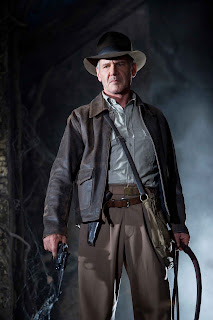 "It's crazy but great," said Ford, 66. "George is in think mode right now." If I had Lucas' money, I'd probably be in "think mode" about what kind of extinct species I'd want to bring back to life, deep fry and cover in chocolate. But that's just me.
The fourth Indy film, Indiana Jones and the Kingdom of the Crystal Skull, grossed $318 million in North American theaters and $770 million worldwide. According to Ford, this success in reviving the franchise has gotten a lot of the right people talking about continuing the series.
"It's automatic, really, we did well with the last one and with that having done well and been a positive experience, it's not surprising that some people want to do it again," Ford told the LA Times.
Crystal Skull was far from the Indiana Jones sequel that everyone was expecting, but with nearly two decades of anticipation, living up to that massive hype would have been impossible. I could have personally done without some of its goofier moments—the infamous “nuking the fridge” scene immediately comes to mind—but it was a fun enough sequel that just happened to delve a little too often into “no friggin’ way” territory. As for a fifth Indy? It's totally unnecessary, but I can’t really feign disinterest in the further adventures of our favorite ophidiophobic archaeologist.
Posted at 2:00 AM
Email ThisBlogThis!Share to TwitterShare to FacebookShare to Pinterest
Labels: Indiana Jones, Movies

i want another one!!! as long as there are no aliens. that was just bizarre on so many levels. but seriously, give me more indyyyy.