McCain and Obama Square Off on Comic Book Shelves 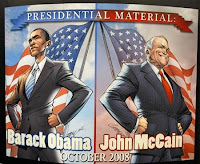 As of this writing, Senators John McCain and Barack Obama are embroiled in a critical town hall debate at Nashville, Tennessee’s Belmont University. While both presidential candidates are touching on some key policy issues, the dorky part of my brain is left wondering why no one's asking the important questions. They may both have plans to remedy the United States’ ailing economy, but how would each of them fare against a Skrull invasion? Could McCain kick Batman's ass?

"It really is a kick to do something that is something so out of the norm for comic books," Scott Dunbier, special projects editor with IDW told Reuters. "I think that people who normally don't go to comic shops are really going to be part of the audience that pick this up."

With comic book film adaptations all the rage these days, get Christopher Nolan on the phone. You know you’d pay ten bucks to see Obama Begins. On the other hand, Iron Maverick is probably more of a rental.
Posted at 9:54 PM
Email ThisBlogThis!Share to TwitterShare to FacebookShare to Pinterest
Labels: Comics, Election 2008