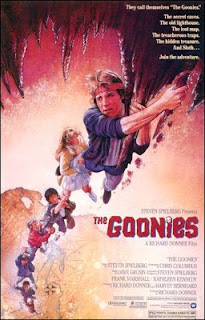 While Josh Brolin has achieved critical acclaim for his portrayal of George W. Bush in Oliver Stone’s biopic, W., he may always be remembered for his breakout role in Richard Donner’s The Goonies, which has remained a family favorite since its 1985 release. For years, there have been rumors that the original gang of adolescent treasure hunters may return for a second installment, but attempts always seem to stagnate in the planning stages. On October 15, Variety reported that those plans are about as dead as One-Eyed Willie himself. And if you’ve seen the movie (how could you not have?), that’s pretty dead.

Donner told Variety that the most recent efforts to get a second Goonies project off the ground fell through, saying "We tried really hard, and Steven [Spielberg] said, 'Let's do it.' We had a lot of young writers submit work, but it just didn't seem to call for it.”

He added, however, that The Goonies may resurface as a musical on Broadway. “Wouldn’t that be great?” Um, nope. Sorry. Never. Unless there’s an elaborate Sloth tapdancing routine or an intricately-choreographed musical number based around the “Truffle Shuffle,” I’d rather my childhood remain at least reasonably intact.
Posted at 10:45 PM
Email ThisBlogThis!Share to TwitterShare to FacebookShare to Pinterest
Labels: Movies

I can't imagine a Goonies sequel. All the actors are in their 30s and 40s and you can't expect them to go on another treasure hunt. Plus the actor who played Chunk lost all that weight and became a lawyer. You can't expect him to be comic relief all over again. It's one of those movies where its legacy stands on its one point in time.

Thank you,
For not ruining at least ONE of my childhood memories.