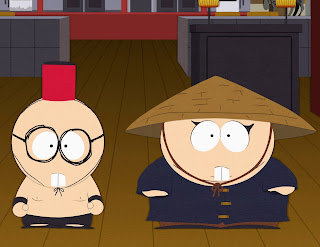 South Park kicked off the second half of its twelfth season last night and…wow. It’s pretty clear that the series' writer/director Trey Parker was not all that impressed by Indiana Jones and the Kingdom and the Crystal Skull.

In the episode, titled “The China Probrem,” Cartman suspects that the elaborate opening ceremonies at the Beijing Olympic Games were signaling a Chinese invasion of the United States. As is the case with most Cartman-centric storylines these days, Butters tag along as he takes customers and staff hostage at a local P.F. Chang’s. This plotline has its moments—particularly Butters accidentally shooting people “in the dick” (not cool)—but the episode truly shines in its secondary story.

At the beginning of the episode, Kyle is clearly traumatized. He and his friends were forced to watch as one of their close friends was raped. Of course, we soon learn that their friend is Indiana Jones. The assailants? George Lucas and Steven Spielberg. Yep. South Park went there. To prevent this from ever happening again, the boys call for the arrest of Spielberg and Lucas for sexually assaulting their own creation. Poignant.

But the joke doesn’t end there. We actually get to see Lucas and Spielberg rape Indy through some downright disturbing scenes in homage to Deliverance and The Accused. It takes balls to go after two of the most powerful filmmakers in the world like this.

Oh, and Indiana Jones and the Crystal Skull will be released on DVD October 14, but I doubt anyone will look at that film the same way ever again. Personally, I thought Crystal Skull was a fun movie (and hey, so did Butters), but I have to appreciate the satire at play here.

Check out SouthParkStudios.com to watch this episode in its entirety. Just don’t do it at work.
Posted at 10:57 AM
Email ThisBlogThis!Share to TwitterShare to FacebookShare to Pinterest
Labels: Indiana Jones, South Park