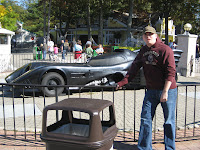 Ah, Fright Fest at Six Flags Great Adventure. There’s something oddly amazing about spending an October Saturday strolling through a summertime amusement park elaborately decorated for the spooky season. Giant spider webs, torches and a “blood”-spurting fountain are just a few of the accoutrement that are sure to get you amped for Halloween festivities. It all certainly worked on me.

For the second year in a row, A group of my friends and I made the trek to Jackson, New Jersey this weekend to take in the park's autumnal celebration of all things that go bump in the night. On Saturday, the skies were clear, the air was cool and the coasters were calling. We rode oldie-but-goodie “Batman: The Ride” first, forgoing the long lines for the brand-spanking new “The Dark Knight Coaster.” I could have personally done without the Prince soundtrack music blaring through the speakers while we waited on line and I’m still a little miffed that Great Adventure has made no attempt to update the ride to reflect the new Christopher Nolan films, but I guess it is important to honor the past. Still, it would have been ten times cooler to pose in front of the Tumbler as opposed to the Tim Burton-era Batmobile that has been on display at the ride’s entrance since the early 1990s. 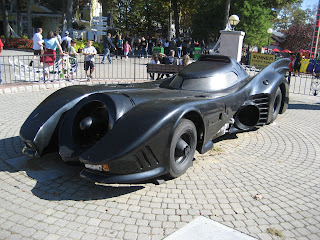 Throughout the day, we also rode “Nitro,” which drops you 215 feet at 80 miles-per-hour; “El Toro,” which boasts a terrifying 76 degree drop and “Superman: Ultimate Flight,” which is, hands-down, my favorite roller coaster of all time. It lays you face-down as it takes you through loops, spirals and curves to simulate the sensation of taking flight as the Man of Steel. You’ll probably have to wait a while to get on—it’s one of the park’s more popular rides—but it’s completely worth it. 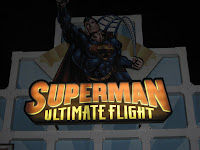 I should also take this time to applaud the ride’s operator for providing me and my friends with entertaining material for the entire ride back home to Westchester, NY. He was trying to be enthusiastic over the microphone but, after a long day of revving up ride passengers, I don’t think he had it in him anymore by mid-evening. His unenthused proclamation of “yeah, yeah, yeah. It's intense” brought our enjoyment of the ride to bold new heights, despite being as exhilarating as a bowel movement. Can I write a letter to Great Adventure asking them to give that guy a raise? Ironically?
Of course, once night falls during Fright Fest, the ghouls come out. As you walk through the park, you’re likely to come across more than a few crazed clowns or chainsaw wielding psychopaths that are more than willing to either eat your face or pose for a snapshot or two. There’s also Halloween-themed shows and attractions scattered throughout the park. Be warned—the really cool ones cost money. So does the delicious, delicious funnel cake.
Fright Fest runs every weekend at Six Flags parks through November 2. Click here to learn all about the festivities and to order tickets online.
Posted at 11:28 PM
Email ThisBlogThis!Share to TwitterShare to FacebookShare to Pinterest
Labels: Real Life Stories