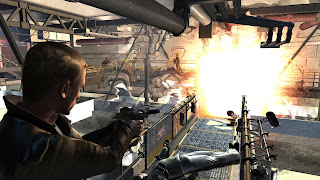 Released in 1997, Rare’s GoldenEye 007 for the Nintendo 64 was a revolutionary title. Not only did it prove that first-person shooters really could work on consoles, but it also showed that a licensed game based on a movie—in this case, the 1995 James Bond film GoldenEye—could transcend expectations and become one of the best games ever released.

For the Bond franchise, that success has been a hard act to follow. After the release of GoldenEye, the license shifted to Electronic Arts, who released movie-based and original Bond titles, all of which were met with mixed reviews. The latest Bond game, Quantum of Solace, is published by Activision and, thanks to its use of the acclaimed Call of Duty 4 game engine, it’s easily the best Bond game since GoldenEye. However, its all-too-brief campaign mode coupled with “been there, done that” multiplayer makes it strictly a weekend rental.

The game is based on both the Quantum of Solace film and its predecessor, Casino Royale, with Daniel Craig providing the voice of his film counterpart along with Eva Green, Judi Dench, Mads Mikkelsen, Olga Kurylenko and Mathieu Amalric. While it spans two films, don’t expect to spend more than five hours on the single-player game. Even for a movie-based game, players should get far more in a solo experience for a $60 game. 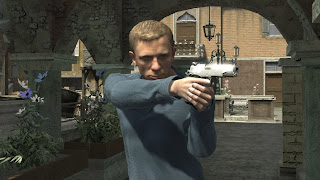 It plays and controls very similarly to Call of Duty 4—also published by Activision—and this is a very good thing. Players familiar with Call of Duty’s run-and-gun gameplay should feel very comfortable slipping into Bond’s tuxedo, and the game’s newly integrated cover system is welcome during its more intense firefights. There are some quieter moments where Bond has to be stealthy and avoid detection, but a majority of the game is heavy on the gunplay. It won’t take you all that long, but you will have fun playing through Quantum of Solace.

Like just about every game released over the past few years, Quantum of Solace breaks up the action with quick-time events and Simon Says-esque “hacking” sequences. Most gamers have no doubt tired with these by now, but developers keep insisting that we want interactive cutscenes and “follow the flashing lights” puzzles, yet developers keep forcing them on us. They don’t hurt the game in any sense, but they add absolutely nothing. Gamers like puzzles, but not when they’re this easy.

And easy is a great way to describe Quantum of Solace as a whole. On the default difficulty setting, most gamers will hardly break a sweat as most levels boil down to “find some cover, wait for enemies to reload and shoot them in the face.” Also, the enemy AI is a bit dull, as the bad guys are usually content with either finding terrible hiding places next to explosive gas canisters or running headlong into Bond as if to say “Daniel Craig! I loved you in Layer Cake!” before getting a few rounds in the chest. For a real challenge, most dedicated gamers will probably find themselves upping the difficulty level almost immediately. 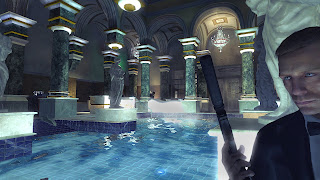 Aside from some minor character animation issues and the fact that most of the game’s enemies seem to shop at the same “evil henchman” clothing store, Quantum of Solace is a beautiful game, recreating locales from both films while retaining a visually distinct Bond flavor. If you’ve played Call of Duty 4, you know the level of detail to expect. Graphically, this game doesn’t disappoint in the slightest.

Aside from the single-player campaign, the multiplayer is reasonably good, although it does little to improve on anything that’s been done before in previous first-person shooters. There are plenty of fun gameplay modes—including Golden Gun and Bond Versus, which pits one player, as Bond, against six members of the Organization—but it’s essentially Call of Duty 4 with a new coat of paint. If you’ve never experienced that game’s online multiplayer then there’s certainly nothing wrong with Quantum of Solace and it plays extremely well. However, if you’re expecting something groundbreaking you won’t find it here.

And in this crowded fall 2008 release season, a title really does need to break new ground to compete with the big dogs like Fable II, Gears of War 2 and LittleBigPlanet. If you’re a Bond fan, there’s no reason why you won’t enjoy Quantum of Solace, but it’s hard to recommend a purchase for anyone else. However, it’s definitely a game worth playing. Bond hasn’t been this good in over a decade and, hopefully, we’ll be seeing him again on consoles real soon.