With so many other distractions—namely work, a social life and Gears of War 2—it took me longer than I would have liked to play through Fable II. When it was first released, I applauded the game’s virtual world and the seemingly endless possibilities that the realm of Albion provided. Having finally conquered evil and restored peace to the land, I can say that there’s a lot about Fable II that is satisfying but, unfortunately, developer Lionhead Studios’ decision to build an open-world game with the casual player in mind leaves it feeling shallow despite the variety of things to do. 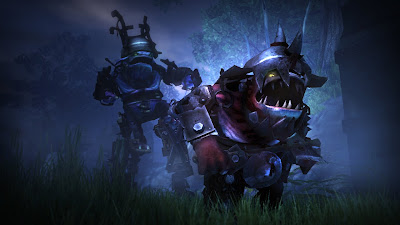 Yes, if one wishes, they can raise enough gold to buy all of the property in the game and amass a veritable army of brides and children, but what’s the point? Aside from the occasional Achievement to unlock, there is little real incentive to dabble in avenues that are tangential to the main plot. Albion may be overwhelming when one first boots up Fable II, but the novelty wears off quick. In time, you won’t care whether the townspeople really like you or whether or not they approve of your new haircut.

As for the main quest, there are lots and lots of battles to slog through, many of which can be won with the simple tapping of the melee button. Magic spells work too, but they leave you far too open to attack to use as often as your blade. Ranged weapons—such as pistols or crossbows—are to be used only when enemies are attack you from a distance (which is pretty rarely). So, basically, action boils down to staving off swarms of enemies by tapping the X button. And since you can’t die—yes, you’re reading that correctly—there is no penalty for losing a battle. When you lose all of your health in combat, your character is “knocked out,” loses some experience points and receives a permanent but negligible scar. Without challenging combat, completing the game’s main quest is an absolute certainty. It leaves you with nothing to conquer.

When viewed as an action RPG, Fable II is an ambitious but ultimately unremarkable experience. There’s lots to do, but little reason to do any of it. It brings to the surface a lot of issues that I’ve been having with the “sandbox” genre lately, namely the fact that the closer gameplay gets to real life, the less interesting it becomes. Managing money, relationships and a career are complicated enough in my own life, so why would I want all of that in my video games?

Keeping its flaws in mind, Fable II is still worth playing through at least once. Albion is a fun—and great looking—place to explore, and the game’s sense of humor is not without its charm. All in all, Fable II is like a visit to the local renaissance fair, except without the chainmail chafing or the oddly-disturbing shouting pickle salesmen.

Keep an eye out for new downloadable content for Fable II—including new items and quests—which will be available on Xbox Live Marketplace in mid-December.