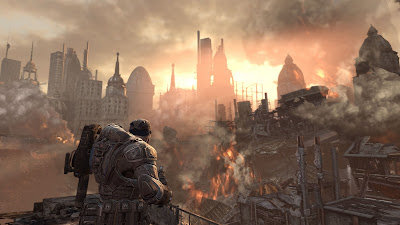 Hype is a curious thing. Whenever a long-awaited book, movie, television series or video game finally reaches the anticipatory masses after months of torturous waiting, the end result is almost never as good as audiences had hoped. Like most people who played and loved the original Gears of War, which hit the Xbox 360 in 2006, I fully expected a sequel to come down the pike in the next few years. But would Gears of War 2 be a marked improvement over the first installment, or would Epic Games rest on their laurels and churn out a by-the-numbers rehash of an already-proven formula?

Thankfully, the folks at the North Carolina-based developer have been hard at work on their Gears sequel, taking everything that worked about the first game—namely its cover system, varied weaponry and frenzied gunplay—while implementing new enemy types, sprawling environments, a more involving storyline and some of the best multiplayer modes to hit consoles in quite some time. Oh, and it’s also got flamethrowers. Barbecued Locust, anyone? 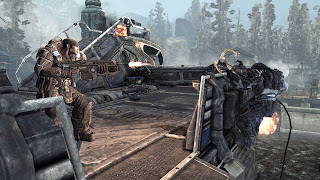 Gears 2 takes place six months after the first game, when the Coalition of Ordered Governments (COG) deployed the Lightmass bomb to decimate the sprawling underground tunnels of the Locust Horde, a mysterious race of war-hungry monsters that had emerged from under the surface of the planet Sera 14 years earlier. Once again, players assume the identity of gravel-voiced soldier Marcus Fenix who, along with his fellow Gears and members of Delta Squad, are engaged in a last-ditch effort to cripple the Locust Horde and bring about peace for humans so that they may rebuild their war-torn society.

As a sequel, Gears 2 asks more storyline questions than it really answers—paving the way for the inevitable Gears 3—but you’ll be surprised that, after the end-credits roll, you won’t feel cheated in not knowing the entire story just yet. While it’s a middle chapter—similar in many respects to Star Wars sequel The Empire Strikes Back—Gears 2 has a clear beginning and end. You won’t be left wanting, but you’ll still be excited about what happens next.

One most also note the smaller, more personal story at play in this installment as Dom, a member of Delta Squad, desperately searches for his wife Maria, whom he hasn’t seen for a decade. This adds a level of emotional involvement in the game’s storyline that was absent in the first Gears, but it does unfortunately come in spurts. At one moment, Dom will be close to tears, but he’s gleefully sawing a Locust Drone in half the next. It’s not entirely consistent, but it is important to show just what these gun-toting tough guys are really fighting for.

But it’s what they’re fighting against that most gamers are more concerned with, and Gears 2 throws an impressive collection of new bad guys at Marcus and company. No longer are the formidable Boomers just lumbering oafs with giant guns. This time, players are up against Flame Boomers, Butchers, Grinders, Maulers and Workers. You can probably guess what each of their specialties are. Other new baddies include Locust Flamers—who each come equipped with the aforementioned flamethrower (called a Scorcher)—vicious Bloodmounts, monk-like Kantus and Tickers, which are skittering little creatures that have a tendency to get up-close-and-personal before they explode. Think of them as bloodthirsty time bombs. You will hate Tickers. Kill them quick. 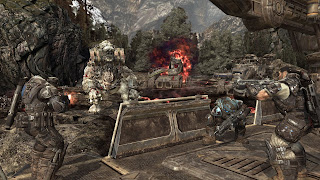 There are larger enemies among the Locust ranks as well. Reavers—the air-borne enemy mounts from the first game—will now attack you from the ground. The hulking Brumaks—which Xbox 360 players only got a glimpse of toward the end of the first game (PC gamers actually got to fight one)—are now a constant threat throughout the single-player campaign. But even these massive beasts are dwarfed by some of the larger foes that Delta Squad must go up against—and inside of.

Graphically, Gears 2 maintains the high level of detail present in the first Gears, but utilizes a broader color palate to escape the repetitive “dirty brown and gray” aesthetic that plagued that game. Now, no two underground tunnels look quite the same, and the variety of locations—from hospitals to labs to underground temples to crumbling city ruins—keeps the campaign visually diverse as you carve a bloody swath through the Locust Horde. 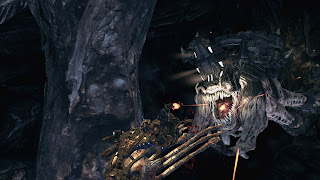 The campaign should take most players around 10 hours to complete on their own on the Normal difficulty setting, but there’s no reason not to revisit previous sections of the game to unlock new achievements or to relive some of the more memorable firefights. However, the real reason to keep coming back to this game is its multiplayer. A vast improvement over the bare-bones multiplayer gameplay in the first game, Gears 2 features eight competitive multiplayer modes, including the new Wingman, Guardian and Submission. A revamped party system and skill-based matchmaking—powered by TrueSkill—makes for a more fluid online experience. Of course, you can still play through the campaign with a buddy using Gears 2’s drop-in/drop-out feature.

However, when all is said and done, the real star of Gears 2 multiplayer is Horde mode, which pits you and four other players against wave after wave of Locust enemies. The mode throws more at you and your teammates as you progress, forcing players to work as a team to attain the highest score possible. It’s fun without being frustrating, and inspires online cooperation as opposed to trash-talking or name-calling. More game developers need to look to Epic’s example.

One would be overzealous in calling Gears 2 a masterpiece, but it’s pretty damn close. A well-constructed, satisfying campaign and deep, addictive multiplayer make this a must-buy. If you don’t own an Xbox 360, go out and get one. Gears 2 is worth the investment.