Night of the Living Plumber 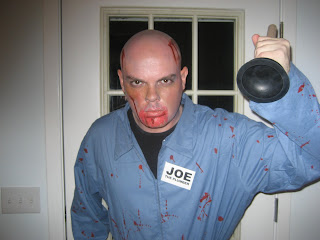 Happy Saturday, Wortmaniacs! I hope you all enjoyed your Halloween tomfoolery last night, whether it involved tricks, treats or getting totally hammered dressed like the Joker or Sarah Palin (easily the two most popular costumes this year). My choice was less predictable (ish) in that I went as John McCain’s buddy Joe the Plumber, of which there were only two last night at Brazen Fox in White Plains. However, only one of us was a zombie (hint: me). I couldn’t resist the chance not only to be political prior to one of the more important elections in our nation’s history but also to play around with fake blood.

To get myself into character over the past week, I’ve been on a steady diet of zombie cinema (that’s right, cinema), including George Romero’s Night of the Living Dead, Dawn of the Dead and Land of the Dead, along with the semi-comedic The Return of the Living, directed by Dan O’Bannon. For anyone rushing for the comment function to remind me that I’ve left out 28 Days Later and its sequel, they’re not really “zombie” movies in the traditional sense. The same rule applies to Planet Terror, which follows standard genre tropes but does not technically feature the undead. There are rules people.

I capped off the week by watching Zack Snyder’s 2004 remake of Romero’s Dawn of the Dead and—I know I’ll catch hell for writing this—I think I might enjoy it even more than the original. It’s far more of a high-octane action film than Romero’s methodical, gory and sometimes poignant exploration of consumer culture, and I have issues with the idea of zombies sprinting after their prey (it eliminates the kind of slow, creeping terror that is a cornerstone of this genre), but Snyder’s film one of the better horror remakes to come down the pike lately. I definitely recommend a rental.
Posted at 5:44 PM
Email ThisBlogThis!Share to TwitterShare to FacebookShare to Pinterest