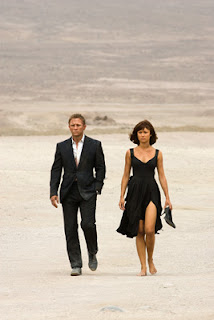 Taking place immediately following 2006’s critically-acclaimed James Bond franchise reboot Casino Royale, Quantum of Solace is a relentlessly fast-paced action film that never truly allows its characters—or members of the audience—to stop for a moment to catch their breath. Having said that, it’s a worthy sequel and one of the better Bond films overall.

Already silencing his most vocal critics with his last outing as 007, Daniel Craig returns to prove that he is, undoubtedly, the best Bond since Sean Connery. He may be the least-refined Bond on film, but Craig’s version of the character bears the closest resemblance to creator Ian Fleming’s “blunt instrument” of the British Secret Service. As in the Fleming novels, Bond makes mistakes in the line of duty, and sometimes has difficulty keeping his assignments from becoming personal. In the original series of 20 films, however, that dynamic became lost as the character too-often devolved into a cartoonish, smirking self-parody. This Bond is brutal, cold-blooded, pissed off and flawed.

And he screws up pretty often in Quantum of Solace, just ask M (Judi Dench), who constantly finds herself berating Bond for leaving a trail of human wreckage as he searches for those at the helm of Quantum, a mysterious worldwide criminal organization. Driven by anger over the death of his lover Vesper Lynd (Eva Green) in the previous film, Bond’s mission leads him to Dominic Greene (Mathieu Amalric), chairman of the ecological organization Greene Planet and prominent member of Quantum. His evil plan—because all Bond villains must have evil plans—is to stage a coup coup d’état in Bolivia and gain control of its water supply. It’s more subtle than nuking Fort Knox or building a diamond-powered orbital space laser, but it works.

Bond is aided this time around by the lovely Camille Montes (Olga Kurylenko)—who, like Bond, is fueled by a personal vendetta—as well as a few other allies both old and new. Unfortunately, because Quantum of Solace is such an action-packed film, we never get as much time with these characters as we’d probably like. Jeffrey Wright once again turns in a slick performance as CIA agent Felix Leiter, and Dench’s M is just as commanding as she’s always been. However, with such an exhausting number of chase sequences and slugfests in Quantum of Solace, there simply isn’t any opportunity for introspection. Perhaps there will be time for all of that in the sequel.

This modern Bond may lack the charm, gadgets and one-liners that once defined the character, but none of those superficial trappings are missed in Craig’s grittier portrayal. Quantum of Solace may be a little too over-loaded with action for its own good, but it’s sure to leave audiences both shaken and stirred.