The Simpsons – "Treehouse of Horror XIX" 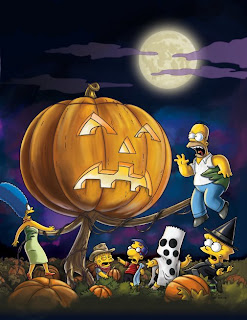 With the show now in its twentieth season, longtime fans of The Simpsons often knock newer episodes for their far-reaching plots, but it’s nearly impossible to find fault in the show’s Halloween specials. This year, with “Treehouse of Horror XIX,” the series' writers may have not only crafted one of the best Simpsons episodes in a long while, but also one of its strongest Halloween specials in recent years.

The episode kicks off with Homer trying to vote for Barack Obama (his bulk requiring him to use a double-wide voting booth, naturally). However, the electronic voting machine counts his vote toward John McCain. When he protests, the machine mangles and kills him in gruesome fashion. A rigged election? No way!

Like all other “Treehouse of Horror” specials, this one is broken into three segments. The first of which, “Untitled Robot Parody,” Is loosely based on Transformers. When Bart is doing some last-minute Christmas shopping for Lisa at a discount store, he finds her a Malibu Stacy convertible, which just so happens to be a transforming robot. It’s much better than last year’s gift (a box full of his burps), but when Lisa’s gift assembles an army of other transforming robots to wage war against a rival race of alien transforming robots (sound familiar?), things get rough for the denizens of Springfield. There are some great gags in this segment, particularly the introduction of “Sex Toy” (“Where haven’t I been?”), the front page of the Springfield Shopper (“Christmas Occurs”), a robot plane vomiting passengers and a crying nacho machine. It even ends strong, with the robots playing a game of human foosball. Hey, Homer thought they might enjoy it.

The second section, “How to Get Ahead in Dead-Vertising,” starts off with a pitch-perfect spoof of the opening titles from AMC’s Mad Men, and revolves around Homer landing a gig killing celebrities so that advertisers can use their likenesses without paying them royalties. The highlight of this segment was a musical montage in which Homer brutally murders George Clooney, Prince and Neil Armstrong so that ad men can use their likenesses to hock George Clooney Brand Novelty Vomit (“now with more chunks!”), Prince’s Choice Drought Resistant Grass Seed and Country-Style Ragu (“It’ll send you to Mars"). After Homer begins thinning the celebrity ranks, the dead stars decide to get revenge on the living, descending from Heaven to exact revenge on everyone exploiting their image. It all ends with a dead Krusty the Clown blowing Homer’s brains out. In Heaven, Homer and Abraham Lincoln share an, er, awkward moment. Not that there’s anything wrong with that.

The final segment—and my personal favorite—is a spoof of the Halloween classic, It’s the Great Pumpkin, Charlie Brown. In “It’s the Grand Pumpkin, Milhouse,” our favorite blue-haired dork takes the Linus van Pelt role in waiting out in the pumpkin patch for the arrival of the so-called "Grand Pumpkin." When he finally does arrive, Milhouse mistakenly offers him some pumpkin bread, which sends him on a murderous rampage through Springfield. This segment is a nice mix of surprisingly edgy humor (the Grand Pumpkin’s a racist?) and reverent homage to the annual Charles Schultz tradition, even going so far as to borrow from its distinct art style.

Overall, this is one of the more memorable Simpsons episodes to air in quite some time and, as always, the macabre humor of this “Treehouse of Horror” special really seemed to let the creative minds behind this series run amok and push a few new boundaries as well.

To view this episode in its entirety, visit thesimpsons.com.

Image: THE SIMPSONS ™ and © 2008 TTCFFC ALL RIGHTS RESERVED
Posted at 11:41 PM
Email ThisBlogThis!Share to TwitterShare to FacebookShare to Pinterest
Labels: The Simpsons

Pumpkin Bread? Bread made especially for pumpkins! How delightful!