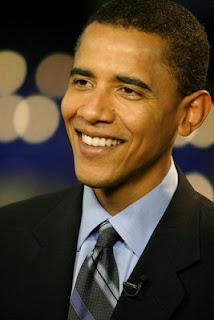 Congratulations to Barack Obama for becoming the 44th president of the United States of America. Not only did he make history last night by becoming the first African American elected into office, but I am confident that he will continue to make history throughout his presidency, providing the country—and, indeed, the world—with the kind of progressive leadership that we have been sorely lacking over the past eight years.

"The road ahead will be long,” he said during his victory speech last night in Chicago’s Grant Park. “Our climb will be steep. We may not get there in one year or even one term, but America—I have never been more hopeful than I am tonight that we will get there."

And I believe him.

Photo courtesy of BarackObama.com
Posted at 1:48 PM
Email ThisBlogThis!Share to TwitterShare to FacebookShare to Pinterest

i believe him too. go america for looking to a progressive new leader!! =)