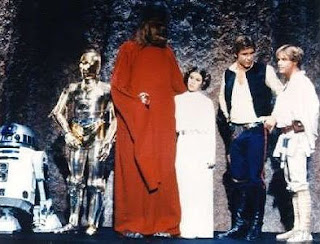 It may have only aired once on Friday, November 17, 1978 on CBS, but The Star Wars Holiday Special has left an indelible mark on the history of George Lucas’ media juggernaut for better or for worse. Okay, it’s mostly for worse, but true fans owe it to themselves to track down a copy of this trainwreck and watch it in its two-hour entirety at least once. It's a geek rite of passage. Only those fans can safely say at cocktail parties that, yes, they have seen Bea Arthur sing to a giant, drunken rat. “Just one more round, friend.” You can’t make this stuff up, but 30 years ago, someone did. That same someone also thought it would be a good idea for Carrie Fisher—who looks like she's under an influence of some kind during the special—to put lyrics to the Star Wars theme to close the show. I’m still shuddering.

And before any of you hop on your George Lucas hatewagons, no, he had precious little to do with this abomination. However, the show did reunite the original Star Wars cast, including Fisher, Harrison Ford, Mark Hamill, Peter Mayhew and Anthony Daniels, all of whom look like there’s something else they’d much rather be doing. Even guest stars such as Art Carney, Harvey Korman and the aforementioned Arthur have a certain despondent look on their faces, as if to say “I don’t know what an Internet is, but I have a feeling that people will one day use it to laugh at what I’m doing here.” Well, they’re right. But, then again, there’s a certain amount of self-awareness that one encounters while watching the Star Wars gang reunite Chewbacca with his family for a Wookiee holiday called Life Day. It’s difficult to laugh too hard at those involved when one finds themselves watching a dubbed copy of a terrible, 30-year-old Christmas special at 2 a.m. in their bedroom. As Obi-Wan Kenobi says, “Who’s the more foolish—the fool or the fool who follows him?” 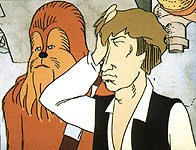 Okay, so there’s a short animated segment of the special that’s pretty good, and actually gave fans a glimpse at notorious bounty hunter Boba Fett a year and a half prior to his live-action debut in The Empire Strikes Back, but there’s little else to defend. That’s probably why, when confronted about the holiday special, both Lucas and the cast like to pretend it never happened. Those hoping for The Star Wars Holiday Special: Special Edition (kinda redundant, especially since it’s not all that special) probably shouldn’t hold their breath, as an official version of the show has never been made available for sale and most likely never will. It’s a shame, since I’ve always thought that Chewbacca’s father Itchy (his full name is Attichitcuk, in case you didn’t know) would benefit from a CGI makeover. I hope I didn't give someone out there an idea. 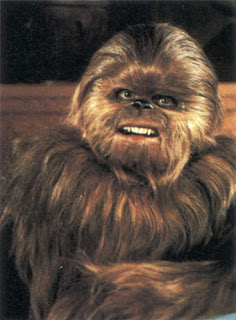 For the most comprehensive information on all things related to The Star Wars Holiday Special—including behind-the-scenes photos, exclusive interviews and details on all aspects of the show’s production—visit the show’s unofficial site at starwarsholidayspecial.com.

Until next time, happy Life Day!

Images courtesy of starwarsholidayspecial.com
Posted at 12:03 AM
Email ThisBlogThis!Share to TwitterShare to FacebookShare to Pinterest
Labels: Star Wars, TV