Hands-On with Call of Duty: World at War 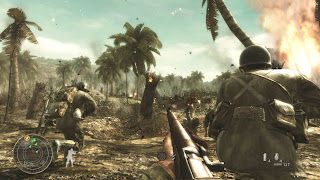 Most first-person shooter fans have had their fill of World War II-based games by now, which is probably one of the main reasons why the present-day Call of Duty 4: Modern Warfare was so well received last year. When it was announced that Activision’s acclaimed series would be once again returning to its World War II roots with Call of Duty: World at War, many gamers were less-than-enthusiastic. Fans were even more disheartened when they learned that Treyarch—the studio responsible for the middling Call of Duty 3—would be developing this latest installment. Apprehensive fans were likely relieved when World at War hit shelves in November, as the game retains the cinematic flair of the fourth installment, transferring its solid overall gameplay mechanics and breathtaking visuals to a World War II setting. 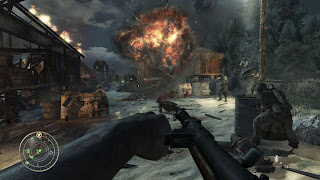 The game also features battlefields previously unexplored in the series, putting players in the boots of a U.S. Marine fighting against the Japanese Army in the Pacific and a soldier in the Soviet Red Army fighting the Nazis in Berlin. The campaign lasts only a few hours, but top-notch production values—including celebrity voice acting from Kiefer Sutherland and Gary Oldman—keep the experience immersive from start to finish.

World at War does, however, have some troubling combat issues that keep it from being as solid as its predecessor. At even the normal difficulty level, you’ll end up dying not because of genuinely challenging battles but because the game throws a seemingly-endless barrage of unavoidable grenades your way as often as possible. There is an on-screen indicator that warns you when a grenade is nearby—which also gives you the option of tossing it right back at the enemy—but even if you run to a seemingly safe distance from the blast, a grenade is cheap, frustrating, instant death nearly every time. The more it happens, the more it seems like a design flaw.

In addition, World at War's AI is oddly unbalanced. At times, enemies will intelligently take cover and fire at you at opportune moments, but often they will stand right out in the open just waiting to be picked off. Friendly AI doesn’t fare much better, offering little-to-no help during the game’s more intense firefights. While it wouldn’t be satisfying for computer-controlled allies to do all of the work for me, a war game shouldn’t make me feel like I’m fighting alone. 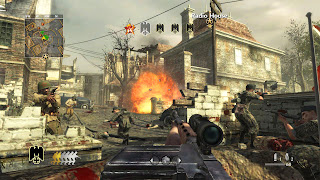 But the strength in a Call of Duty title lies primarily in its multiplayer which, I can safely say, is just as good in World at War as it was in Modern Warfare. You’ll be using World War II-era equipment, weapons and vehicles, but the matchmaking, upgrades, rankings, perks and wide variety of game modes make World at War a satisfying multiplayer experience that should win over fans of its predecessor.

A great extra in World at War, unlocked once you complete the single-player campaign, is Nazi Zombies mode, which pits you against, you guessed it, Nazi zombies. Kudos to Treyarch for including such an off-kilter game mode in an otherwise serious World War II shooter. For a superior zombie experience I recommend Left 4 Dead, but this mode is a lot of fun. Playing it alone or cooperatively, Nazi Zombies should remind most shooter fans of the phenomenal Horde mode in Gears of War 2. Fight of waves of zombies, earn points, repeat.

It’s not a revolutionary game, and in many respects this is Modern Warfare recast in a less-than-modern setting, but is that really such a bad thing? Even if they've grown tired of World War II video games, first-person shooter aficionados owe it to themselves to check this game out.

Ok, so I got CoD w@w for jesus' birthday and I'm about three hours deep. Last year around this time we were all playing CoD modern warfare, and I'm beginning to like this new tradition! I was never a huge fan of war games, especially ones set in ww2. But modern warfare and it's crisp graffics and fanciness helped me get over it and for that I am thankful. But going into it I was still a little weary of ww2 games. I was pleasently suprised to see that the intro graffics did not look like I was playing it on a play station 2! The gameplay is great, and it's always nice to be able to actually point your controller at the screen and fire away! I had a little trouble with the zapper contols at first, but as soon as I realized I was using it wrong, it was great!

In a nutshell, if you own a wii and your jealous of your friends and their fancy xboxs, this game will finally give you a reason not to be! Stick that in your box and smoke it! Ha! ... Ahem.... Sorry

So I just finished it and ok so the game was great. Graphics (for a Wii game) were awesome. I used the zapper and that was super fun. But WTF Activision, No Mother Fucking ZOMBIE NAZIS?????? Yea, apparently the Wii version doesn’t have zombie Nazis. Apparently us wimpy wii-wiis can’t handle zombies, even though I can think of at least 3 Zombie games that I have played for the Wii.