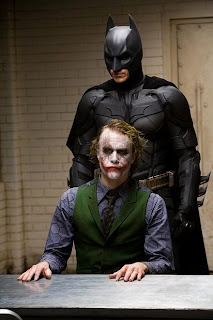 On Thursday, December 11, the Hollywood Foreign Press Association (HFPA) announced its nominees for the 2008 Golden Globe Awards and, as expected, the late Heath Ledger was recognized for his nuanced take on the maniacal Joker in the year’s runaway hit, The Dark Knight. While it’s satisfying to see Ledger nominated for Best Performance by an Actor in a Supporting Role in a Motion Picture, it’s simultaneously disappointing that The Dark Knight was overlooked in every other category.

Ledger’s scene-stealing portrayal of the Clown Prince of Crime surely elevates an already great film, but that’s just the thing—The Dark Knight is a great film, not just an impressive individual performance. While I admittedly have yet to see any of the nominees in the Best Motion Picture (Drama) category (The Curious Case of Benjamin Button, Frost/Nixon, The Reader, Revolutionary Road and Slumdog Millionaire), I can’t help but think that the HFPA may have overlooked Christopher Nolan's Batman Begins sequel because it’s a “comic book movie.” Comic book adaptations have surely come a long way, but they have clearly yet to escape the genre’s “strictly kids’ stuff” stigma. Perhaps the Academy of Motion Picture Arts and Sciences (AMPAS) will look more kindly on the Caped Crusader when Oscar season rolls around.

On a more refreshing note, both Tom Cruise and Robert Downey Jr. were nominated in the same category for their uproariously funny supporting roles in this summer’s Tropic Thunder, while James Franco picked up a nomination for Best Performance by an Actor in a Motion Picture (Comedy or Musical) for his stoner turn in Pineapple Express.

The 66th Annual Golden Globe Awards will take place Sunday, January 11, 2009 at the Beverly Hilton, with a live telecast beginning at 8 p.m. (EST) on NBC. Click here for a full list of Golden Globe nominees.
Posted at 1:09 PM
Email ThisBlogThis!Share to TwitterShare to FacebookShare to Pinterest
Labels: Movies, The Dark Knight