Who would have thought that surviving a zombie apocalypse could be such a great form of stress relief? With multiplayer first-person zombie shooter Left 4 Dead, Valve Corporation (Half-Life, Portal, Team Fortress) encourages gamers to live out their undead-fighting fantasies in what may be the best zombie action game ever made. 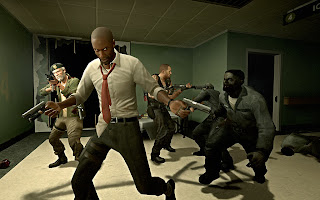 If you’re looking for a storyline or character motivation, you certainly won’t find much of either in Left 4 Dead. The game boils down to playing the role of one of four human characters who must fight through hordes of ravenous zombies to make their way from safe house to safe house. There are four scenarios—each framed as a horror movie—taking players through a hospital, a farmhouse, a rural town and an airport. Gameplay-wise, all of the scenarios are basically the same, pitting the survivors against hundreds of undead flesh-eaters. The zombies here bear more resemblance to the fast-moving variety featured in Zack Snyder’s Dawn of the Dead remake than to the lurching, moaning corpses in George A. Romero’s original. Their speed gives Left 4 Dead an element of twitchy panic that keeps gameplay both frantic and fun.

In addition to the overwhelming numbers of "Common Infected" in each of the game’s scenarios, players will also be confronted by mutated "Special Infected," which have their own unique abilities and attacks. Hunters, for example, will pin players to the ground and viciously maul them until one of the other survivors saves them while Smokers lash out at the humans with a whip-like tongue. As one can probably guess by their name, Tanks are hulking beasts that use their immense size and strength to pummel the survivors, requiring players to gang up on them with their most powerful weapons to take them down quickly before they cause too much damage. The Witch, a dangerous female zombie, can take players out with a single swipe of her claws if she is startled. My personal favorite special zombie in Left 4 Dead is easily the Boomer, a fat, bulbous infected that vomits green bile on the survivor characters, the smell of which alerts other zombies to the humans’ location. Dangerous and revolting. What a combination.

It’s possible to play Left 4 Dead solo with three computer-controlled allies, but the real fun of this game is playing online with friends or complete strangers. Few games inspire the level of teamwork necessary to make it through Left 4 Dead’s scenarios alive as a group. Try to abandon your comrades and you’ll probably wind up with more than a few bite marks on your arms and torso. Oh, and you’ll probably be dead. There’s also a Versus mode, which allows players to control special infected against the humans to see how the other half lives.

With only three modes of play (Campaign, Versus and Single Player), one wonders how Left 4 Dead stays interesting, but thanks to the game’s “AI Director,” scenarios are different each time you play them. It’s nearly impossible to predict when a Hunter is going to leap out of nowhere and pin you to the ground, or when a Boomer is going to sneak up on you and lose his lunch right in your face. As if eviscerating zombies could ever possibly get boring, Left 4 Dead is never the same game twice.

Thanks to Dead Rising and the Resident Evil series, there has been no shortage of zombie-blasting goodness in video games for quite some time. However, Left 4 Dead recreates the feeling of being in a zombie film better than just about any game ever released. It’s not deep by any means, but it’s incredible fun and a must-play for fans of cooperative online gaming.