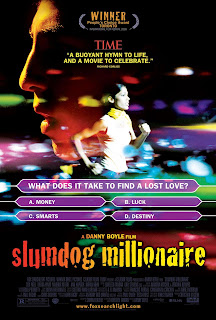 Prior to seeing Slumdog Millionaire, I knew almost nothing about it. I had heard that it was directed by Danny Boyle (Trainspotting, 28 Days Later) and that it somehow revolves around India’s version of Who Wants to Be a Millionaire, but that’s about it. I was pleasantly surprised that this rags-to-riches underdog story not only has its heart in the right place, but is also incredibly exhilarating, moving along at a breakneck pace without sacrificing its ambitious scope.

Growing up on the streets of Mumbai, Jamal Malik (played as a teenager by Dev Patel) is a contestant on India’s Who Wants to Be a Millionaire and is just one question away from winning 20 million rupees. The only problem is that the show’s host (Anil Kapoor) doesn’t believe that an uneducated, tea-serving “chai wallah” at a Mumbai call center could possibly be able to answer the more difficult questions correctly without cheating. As a result of this suspicion, Jamal is arrested and forced to review each of his correct answers to prove his innocence to the police. With each question, the film flashes back to a point in Jamal’s childhood where we see just how he came to know the answers to the show's questions and, in turn, we learn more and more about Jamal’s tumultuous childhood.

The first section of the film—when Jamal and his older brother Salim (played as children by Ayush Mahesh Khedekar and Azharuddin Mohammed Ismail respectively, and by Tanay Chheda and Ashutosh Lobo Gajiwala when they get a bit older) are orphaned and forced into panhandling—is the most difficult to watch, primarily because it paints the Mumbai slums in such an unsavory light, with Boyle concentrating on making the city’s trash-strewn streets look as uninviting as possible. But there is a ray of hope for young Jamal in a fellow orphan named Latika (played as a child by Rubiana Ali, by Tanvi Ganesh Lonkar when she gets older and by Freida Pinto as a young adult). While Slumdog Millionaire begins as a dark, somber and sometimes horrifying meditation on the hardships of living on the streets of India, it soon becomes a celebration of Jamal’s quest to reunite with Latika, from whom he is constantly separated due to circumstances beyond his control. It’s overtly saccharine even for a love story, but it’s rare that a film of this caliber celebrates life rather than dissecting its lesser points.

Slumdog Millionaire is a film deserving of its near-universal acclaim. If you’ve ever seen a movie about a street urchin who gets a shot at being a millionaire, you probably already know how this one ends. However, in spite of its inherent predictability, Slumdog Millionaire is sentimental without being too sappy and poignant without being pretentious. This is a must-see film.

I agree wholeheartedly. I just saw the film today with little background knowledge of it but because of all the hype, I decided to see it. This was an enjoyable film and could easily transcend most American audiences.