Even though most expect this year’s Super Bowl matchup between the Arizona Cardinals and the Pittsburgh Steelers to be a fairly one-sided affair—my money’s on the Steel City winning by a lot—at least the commercials should be pretty entertaining. According to Variety, movie studios are capitalizing on the estimated 100 million U.S. viewers with an impressive lineup of teaser trailers airing during the game. Advertisements have been announced for high-profile summer releases including J.J. Abrams’ Star Trek reboot, Stephen Sommers’ G.I. Joe: The Rise of Cobra and Michael Bay’s Transformers: Revenge of the Fallen. I could probably point out that the latter two are basically ads for two-hour Hasbro toy commercials, but that would just be downright cynical.

Which commercial am I most looking forward to? I’m gonna have to go with the Transformers sequel. Not much is known about Revenge of the Fallen, and it will be a lot of fun seeing the Autobots and Decepticons in action once again. Oh, and the sequel promises more Megan Fox, so that might have something to do with my excitement. Ahem.

Enjoy the game, Wortmaniacs!
Posted at 4:49 PM No comments:
Email ThisBlogThis!Share to TwitterShare to FacebookShare to Pinterest
Labels: Transformers 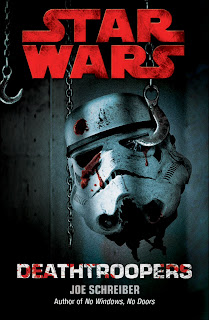 While more than a few shrieks were heard around the world after The Phantom Menace hit theaters, Star Wars has never really been all that scary. Del Rey Books and author Joe Schreiber (No Windows, No Doors) hope to change all that later this year with Deathtroopers, a horror novel scheduled to hit bookshelves on October 27.

On January 26, StarWars.com unveiled the gruesome cover art for the forthcoming paperback. While little is known about the book itself, the image of a bloodied Imperial Stormtrooper helmet—with a head presumably still inside—hanging from an ominous hook already has my interest piqued. Will the book itself deliver with an equally-creepy premise? We’ll all find out this Halloween. Well, maybe not all of us, but I'm sure those of us who get thrown into a rage when people misspell Kashyyyk will be lining up for a copy.

I’m an admitted Star Wars fanatic, but I haven’t really gotten into the dozens of ancillary novels based in its universe. Aside from Timothy Zahn’s Thrawn trilogy (Heir to the Empire, Dark Force Rising, The Last Command), the X-Wing series and Shadows of the Empire, there aren’t many Star Wars novels that I can seriously recommend to casual fans. However, one can’t help but appreciate that this wealth of content does exist, providing other creative minds with the means to further explore George Lucas’ ever-expanding mythology.
Posted at 11:18 PM No comments:
Email ThisBlogThis!Share to TwitterShare to FacebookShare to Pinterest
Labels: Books, Star Wars

Yes, I’m aware that the headline rhymes, but when we’re talking about a playable demo for the sure-to-be-classic fifth installment in the Resident Evil franchise, you can probably forgive me. The Resident Evil 5 demo, which became available exclusively for Xbox Live Gold members today, includes three single- and two-player co-op levels to give fans a sense of what to expect when the game hits store shelves March 13. The demo will be made available to Xbox Live Silver members on February 29.

For those not in the know, this game marks the return of Resident Evil veteran Chris Redfield as he teams with a new partner, Sheva Alomar, to get to the bottom of a mysterious bioterrorist attack in sub-Saharan Africa.

In preparation for the game’s release, I’ve been getting reacquainted with the survival horror franchise by picking up Resident Evil 4: Wii Edition. I played through the GameCube version of the game multiple times when it was released in 2005, but I could hardly resist giving it another go with the Wii Remote motion controls. Granted, I apparently suck at aiming the controller at the things I want to stop living, but the twitchy gameplay adds a satisfying level of panic to an already nerve-racking experience.
Posted at 11:50 PM No comments:
Email ThisBlogThis!Share to TwitterShare to FacebookShare to Pinterest
Labels: Video Games, Xbox 360

While a legal dispute between Warner Bros. and Fox threatened the theatrical release of the film adaptation of Alan Moore and Dave Gibbons’ Watchmen, both studios have agreed to an out-of-court settlement requesting that the case be dismissed, according to The Hollywood Reporter. The agreement is said to entail a cash payment to Fox and awarding the studio a percentage of the film’s box office take.

Fox sued Warners in February of last year, claiming copyright infringement based on an earlier agreement the studio had made with producer Larry Gordon. On December 24, Judge Gary Feess ruled that Gordon did not secure rights to the film from Fox before selling it to Warners.

This ruling cast an ominous cloud over the $130 million project, with many fans fearing that the film would not hit theaters on its March 6, 2009 release date or, in a worst-case scenario, may never see the light of day. Thankfully, a joint statement released by both studios confirms that we’ll be watching the Watchmen on time.

"Warner Bros. and Fox, like all Watchmen fans, look forward with great anticipation to this film's March 6 release in theaters,” the statement read.

In the word(s) of Rorschach, “Hurm.” That means I’m excited.
Posted at 12:30 PM 2 comments:
Email ThisBlogThis!Share to TwitterShare to FacebookShare to Pinterest
Labels: Watchmen

Will the Joker Return in a Dark Knight Sequel?

Little is known about the inevitable sequel to The Dark Knight, but producer Chuck Roven told MTV’s Splash Page that director Christopher Nolan and writer David Goyer are already “thinking" about the next installment in the blockbuster Batman film franchise.

When asked about future villains and whether the series would have gone in a different direction if filmmakers had known the late Heath Ledger would not be reprising his role as the maniacal Joker, Roven hinted that we may not have seen the last of the Clown Prince of Crime. Let the speculation begin.

While this is far from an official confirmation, this at least opens the door for re-casting the Joker in a future Batman film based on Roven's emphasis on separating actors from roles. However, matching the unhinged menace of Ledger’s Joker would be no easy feat for anyone chosen to don the character’s trademark purple suit and grease paint. In addition, no actor would be able to escape immediate comparisons to Ledger's critically acclaimed take on the iconic comic book villain.

In other Dark Knight news, the film snagged five People’s Choice Awards on Wednesday, January 7, including favorite movie. Reuters has the full story.
Posted at 1:57 AM 2 comments:
Email ThisBlogThis!Share to TwitterShare to FacebookShare to Pinterest
Labels: Movies, The Dark Knight

Are Your Presidential Senses Tingling? 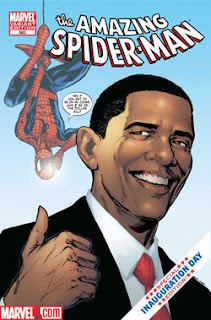 In one of the more unexpected superhero team-ups, it seems like our friendly neighborhood Spider-Man will be joining forces with President-elect Barack Obama in the pages of The Amazing Spider-Man #583, which hits comic book shops nationwide on Wednesday, January 14.

The issue’s five-page bonus story, written by Zeb Wells, Todd Nauck and Frank D’Armata, pits the wallcrawler against the Chameleon, who is attempting to spoil Obama’s inauguration. If that’s not enough to pique your interest, the story even features an Obama-Spidey celebratory fist bump.

USA Today reports that Obama had collected Spider-Man comic books as a child, and remains a fan of the character due to his “inner turmoil.” Marvel editor-in-chief Joe Quesada explains that Obama’s admiration for the webslinger was the primary inspiration for this special issue.

"It was a natural after we learned the new president is a Spider-Man fan," says Quesada. "We thought, 'Fantastic! We have a comic book geek in the White House.'"

An Obama variant cover by artist Phil Jimenez is limited to half the run and is expected to sell out quickly.

Visit comicshoplocator.com to find a comic book retailer near you.
Posted at 8:33 PM No comments:
Email ThisBlogThis!Share to TwitterShare to FacebookShare to Pinterest
Labels: Comics, Marvel Comics, Spider-Man

While Tarantino’s last directorial effort, 2007’s Death Proof, was met with mixed reactions, it’s hard not to be at least intrigued by a Tarantino-helmed WWII film, which is sure to feature no small amount of bloodshed and stylized action. But will Tarantino’s brand of over-the-top violence trivialize one of the greatest tragedies in history?
Posted at 11:27 PM 3 comments:
Email ThisBlogThis!Share to TwitterShare to FacebookShare to Pinterest
Labels: Movies, Quentin Tarantino
Newer Posts Older Posts Home
Subscribe to: Posts (Atom)