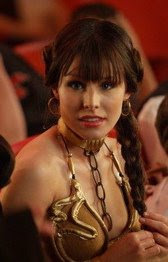 Regardless of how we all felt about the finished product, the months leading up to the May 19, 1999 release of Star Wars: Episode 1 - The Phantom Menace were an exciting time to be a geek. For the first time in 16 years, a new Star Wars adventure was on its way, inspiring some of the most devout followers of the Force to go so far as to set up camp outside movie theaters weeks ahead of the film's opening just to be among the first to experience it. Sure, the actions of those people did little to endear Star Wars fans to the general public, but it was their moment and no one could deny them that.

Commemorating the extreme level of Star Wars fervor during that unique era in movie history is Fanboys, a film directed by Kyle Newman that chronicles four fans' trip across the country to George Lucas' Skywalker Ranch to steal an early print of The Phantom Menace. You see, one of them has been diagnosed with cancer and wishes to see the Star Wars prequel before he dies. While cancer is certainly never funny, Fanboys is touted as a comedy by and for Star Wars fans, and has been hotly anticipated for the past several years. It was supposed to hit theaters in 2007—the 30th anniversary of the original Star Wars film—but distributor The Weinstein Company's disapproval of Fanboys' cancer subplot led to a series of reshoots and edits to remove that piece of the story in favor of Superbad-esque raunchy humor. The extensive cuts sparked an outcry among Star Wars fans to restore the cancer subplot, urging the studio to release the film as intended. Fan activism ultimately paid off.

Fanboys opens this weekend on 44 screens nationwide in Austin, Seattle, Houston, San Francisco, New York, Los Angeles, Philadelphia and Chicago. If it does well enough, it might receive a wider release, according to the film's MySpace page. And guys, even if you're not into the whole Star Wars thing (shame on you), the film feature's Kristen Bell in a gold, metal bikini. That should pique your interest.
Posted at 11:34 AM
Email ThisBlogThis!Share to TwitterShare to FacebookShare to Pinterest
Labels: Movies, Star Wars

"Sure, the actions of those people did little to endear Star Wars fans to the general public, but it was their moment and no one could deny them that."

Those people? Their moment? Come on James. Please tell your Wortmaniacs how many times you saw it in theaters?

Not just you, but your viewership as well. Myself included! I mean I didn’t see it as many times as you did, but I saw it twice and that’s alot! or at least alot more than I should have HAHA!

Well, with "those people" I was referring to fans that were camping out on line for several weeks. While the mainstream media was less than kind in their coverage of the Star Wars lines back then, it was indeed their moment to showcase their devotion to the Star Wars saga.

And for the record, I saw The Phantom Menace 9 times. I don't know how I pulled that off.

Nine times in the theaters?! Wow. I think I only saw it three times overall, once in the theater, again when it came out on video, and once more to prepare myself for Episode III.

Oh, come on. Even I'm into Kristen Bell in a Slave Leia bikini.