A Literary Classic with a Dash of the Undead 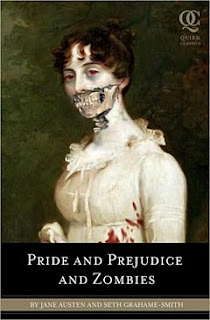 While zombies have been invading bookshelves a lot these days with modern titles such as Max Brooks’ World War Z and The Zombie Survival Guide, classic literature has remained relatively safe from the undead. Until now.

Later this year, Quirk Books will unleash Pride and Prejudice and Zombies, an updated version of the Jane Austen classic that is swarming with, as its title suggests, the living dead. Writer Seth Grahame-Smith has transformed the British novel of manners into a gory horror tale pitting characters Elizabeth Bennet and Fitzwilliam Darcy against legions of decomposing flesh eaters. Grahame-Smith told Entertainment Weekly’s PopWatch blog that zombies were a natural fit for a mash-up of the public domain work over other popular horror phenomena such as robots or vampires.

“…when you take a look at the original book, it's almost as if, subconsciously, Jane Austen is laying out the perfect groundwork for an ultraviolent bone-crushing zombie massacre to take place.” He added, “These aristocrats are trying to get on with their lives as best they can, despite the fact that the country is being devoured around them. They still have their balls and their teas and their manners. It was terrific fun to write, in the style of Jane Austen, describing horrific deaths and entire villages being slaughtered and burned to the ground.”

But will it be terrific fun to read? We’ll find out when Pride and Prejudice and Zombies hits shelves on April 1st.
Posted at 4:23 PM
Email ThisBlogThis!Share to TwitterShare to FacebookShare to Pinterest
Labels: Books, Zombies