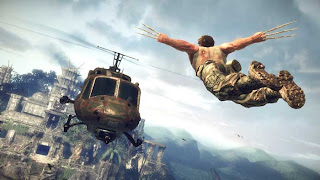 At New York Comic Con, Activision and Raven Software invited fans to a sneak peek at their upcoming adaptation of X-Men Origins: Wolverine, a title that already looks far superior to most movie-to-game translations and seems to do a great deal of justice to the iconic X-Man.

First off, this game is violent. Very violent. Whenever Wolverine is translated to a medium outside of comic books—be it animation, feature films or video games—the character is typically never able to fully let loose with his claws. Sure, there may have been some bloodless takedowns in the X-Men film series courtesy of our favorite clawed Canuck, but the character's trademark ferocity always seems restrained by the need to keep him kid-friendly. It’s pretty difficult to sell plastic Wolverine claws in toy stores when they spend most of their screen time covered in viscera. Raven, however, doesn’t seem all that concerned with making Wolverine fun for the whole family. In this game, he kills people and holds nothing back.

Based on the 15-minute demo I saw at NYCC, it seems as though Wolverine spends the majority of the game impaling, decapitating and even cutting in half any enemy that stands in his path. While graphic content is in no way a substitute for solid gameplay, it certainly doesn't hurt in this case. Like God of War and other similar brawlers, Wolverine allows players to upgrade their attacks and chain combos together to dispatch their enemies in the most satisfying—and gory—ways possible. Also, the game showcases Wolverine’s healing abilities amazingly through real-time regeneration on his character model whenever he sustains heavy damage.

A visually stunning game, this may turn out to be one of the few video games based on a film to transcend expectations. It looks phenomenal, and seems to both follow the film’s storyline as well as provide its own unique thrills.

Look for X-Men Origins: Wolverine – The Video Game on store shelves May 1. Visit the game’s official site at uncaged.com for more details.

Oh, and as for the demonstration itself, Activision easily had the coolest giveaway at NYCC: Giant foam Wolverine claws. Awesome. 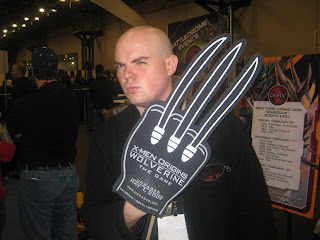 I should have known you were going to use that picture on your blog! Hahaha! Awesome

Yeah, you know how my mind works. I can't resist posting that thing everywhere I can.

im happy to say i designed that claw at work :-)