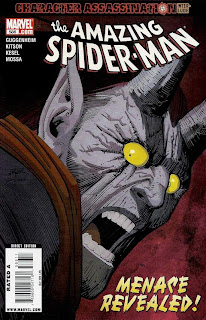 It may surprise the general, non-geeky population, but The Amazing Spider-Man is a comic book worth buying even when it doesn’t have the 44th president of the United States on its cover. While the title has had its ups and downs in recent years, it has flourished following its reboot with the “Brand New Day” storyline, which established a new status quo for the web-slinger and brought the character back to his roots. It also completely erased Peter Parker's marriage to Mary Jane, so you can imagine the kinds of shenanigans he's getting into these days. Once again, Spider-Man is fun, providing the type of escapism that attracted most readers to comic books in the first place.

The Amazing Spider-Man #586 is no exception, shedding necessary light on a relatively new villain, the diabolical Menace. First thought to be an amateur following in the footsteps of Spidey's arch-nemesis, the Green Goblin, Menace emerges in this issue as something far more than that. I’m not going to spoil it for casual readers, but this issue reveals that Menace is a lot closer to Spider-Man/Peter Parker than we first thought. And no, Menace is not an Osborn. That would just be predictable.

If you’ve ever been a Spider-Man fan and were turned off by the character in years past, rest assured that Marvel Comics’ “Spidey Braintrust”—Bob Gale, Marc Guggenheim, Dan Slott and Zeb Wells—is taking good care of him.
Posted at 11:08 PM
Email ThisBlogThis!Share to TwitterShare to FacebookShare to Pinterest
Labels: Marvel Comics, Spider-Man