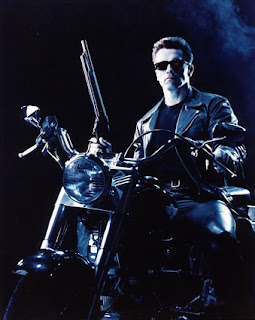 You didn’t think that we’d be seeing a fourth Terminator movie without an Arnold Schwarzenegger appearance of some kind, did you?

According to Variety, Schwarzenegger—who has headlined all previous entries in the film series as the titular cyborg—will be making a brief appearance in the latest installment. Appropriately enough, the cameo will be computer-generated. Scary. This should probably worry the Sarah Connors of the world, but it’s good news for fans.

Director McG reportedly used Schwarzenegger’s body-cast mold created for the first Terminator as a basis for a digitized version of the character. The California governor gave the footage the thumbs up, allowing McG to include it in the finished film.

Terminator Salvation opens May 21.
Posted at 10:52 AM
Email ThisBlogThis!Share to TwitterShare to FacebookShare to Pinterest
Labels: Movies