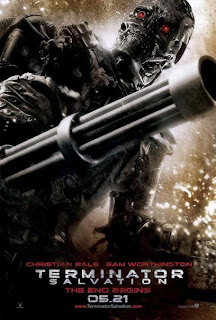 Terminator Salvation’s May 21 release date is still weeks away, but director McG is already prepping for a follow-up if the fourth installment of the blockbuster franchise is successful.

“I would never presume there would be another picture—that is up to the audience,” he told the MTV Movies Blog. “But if the audience jumps up and likes it and wants another one, Christian [Bale] and I have been talking about it and we’ll see what happens.”

Keeping in line with just about every science fiction or fantasy property these days, McG plans on turning his Terminator revival—depicting the post-Judgment Day struggle between man and machine—into a trilogy. Anyone hoping for this film to bring any semblance of closure to the 25-year-old series will likely wind up disappointed by the time the credits roll.

In related killer robot (or cybernetic organism) news, it looks like Terminator: The Sarah Connor Chronicles may be saying “hasta la vista, baby” to its dwindling viewership. Entertainment Weekly’s Michael Ausiello writes that a source close to the show told him that it has been unofficially canned. A Fox insider added, “Consider it canceled.” However, we won’t know whether or not to expect a third season of The Sarah Connor Chronicles until Fox announces its fall schedule on May 18.

So it looks like we might be getting more Terminator movies, which is great news. However, the surprisingly good Sarah Connor Chronicles—which, against all odds, turned Brian Austin Green into a total badass—could be on the chopping block. Is it possible to be excited and disappointed at the same time? Excitappointed?

Hey, if a Hollywood director can go by the name “McG,” then I'm officially allowed to make up words.
Posted at 5:14 PM
Email ThisBlogThis!Share to TwitterShare to FacebookShare to Pinterest
Labels: Movies, TV

You just lame-ified your self by makeing up that wordaphrase.