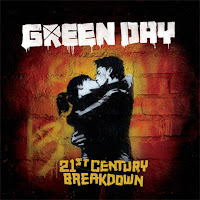 A follow-up to Green Day’s Grammy-winning, multi-platinum American Idiot (2004), 21st Century Breakdown is yet another grandiose concept album that infuses the trio’s pop-punk sensibilities with classic rock influence and a heavy dose of power balladry. If you liked the politically minded American Idiot, you'll be delighted to know that this spiritual sequel is more of the same. Arguably, it's even better.

21st Century Breakdown is a three-act story revolving around two young characters, Christian and Gloria, who are finding their way in post-9/11 America and contending with war, poverty and misguided leadership. They’re hurt, confused and, in keeping with Green Day’s punk rock origins, they’re pissed off. Never is this more apparent than in the song “Horseshoes and Handgrenades,” when frontman Billie Joe Armstrong screams, “I’m not fucking around!” We believe him.

But 21st Century Breakdown isn’t all cynical rage and despair. Among its 18 tracks are some of Green Day’s best tunes, including the infectious “Know Your Enemy,” the epic “¡Viva La Gloria!” and the haunting “21 Guns,” on which Armstrong displays an impressive vocal range. While there are plenty of great standalone songs on this album, it’s best enjoyed as a beginning-to-end experience. It’s refreshing that Green Day is championing concept albums in the iPod age. We need more of these.

They’ve matured a great deal since their 1994 breakout album Dookie, but Armstrong, drummer Tré Cool and bassist Mike Dirnt have never been more relevant or more ambitious. With American Idiot and 21st Century Breakdown, Green Day has successfully made the transition from bratty pop-punkers to larger-than-life, socially conscious stadium rockers. And they’re only improving with age.

John had a lot to say about this album too... but not all of it was as ecstatic. :)