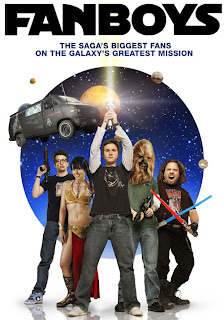 While it may not be the most joyous anniversary for some hardcore Star Wars fans, The Phantom Menace hit theaters 10 years ago today on May 19, 1999. To commemorate the infamous occasion, the Star Wars-centric comedy Fanboys hits DVD after a brief stint in select cities earlier this year.

Directed by Kyle Newman and starring Sam Huntington, Chris Marquette, Dan Fogler, Jay Baruchel and Kristen Bell, Fanboys is billed as a love letter to the film saga and its fans and in many ways it succeeds at that. At its best, this film is a decent road comedy peppered with Star Wars references that taps into the communal power of fandom. However, non-fanboys need not apply. These aren't the laughs you're looking for.

Set in 1998, Fanboys follows a group of Star Wars geeks on a cross-country journey to Star Wars creator George Lucas’ Skywalker Ranch to catch an early glimpse at a work print of the highly anticipated (and later widely reviled) prequel film. One of the characters, Linus (Marquette), is dying of cancer, adding an element of urgency to the whole affair. In all likelihood, he won’t live to see the film premiere.

Fanboys’ cancer subplot was a major point of contention prior to the film’s release, with studio execs fearing that it would cast a shadow over an otherwise fairly lighthearted goofball comedy. Fortunately, the subplot is handled delicately—as cancer is never funny—but it seems unnecessary and cheap. When the fanboys tangle with a group of frothing Trekkies, we should be chuckling. Instead, we’re reminded that one of the characters has just months to live. It just doesn't feel right for this kind of comedy, and makes the entire film tonally uneven.

For Star Wars fans—Fanboys’ one and only audience—there’s a lot of fun to be had. Unfortunately, whenever this film isn’t mining Lucas’ franchise for laughs it’s just a paint-by-numbers, occasionally raunchy comedy. The premise is great, but Newman never delivers on it fully.

That said, the cast does a great job with the material they’re working with and makes the film watchable if not entirely memorable. Fogler (Balls of Fury) is entertaining as the sex-crazed Hutch, while Baruchel (Knocked Up, Tropic Thunder) brings an awkward charm to the bespectacled Windows. Huntington (Detroit Rock City, Superman Returns) and Marquette (Just Friends) give some dramatic weight to the story as two estranged childhood friends, and the adorable Bell (Heroes, Forgetting Sarah Marshall) plays every geek’s dream girl as Zoe. She also shows up at the end of the film in Princess Leia’s metal bikini from Return of the Jedi. Take note, ladies: That’s the way to a fanboy’s heart.

Fanboys isn’t a bad film, but it’s not all that inspired. Rent it, get your geeky friends together, grab some brews and enjoy it for the Star Wars nods, the barrage of cameos and an amusingly accurate depiction of what it was like to be a Star Wars fan in 1998. Just set your expectations low—advice that would have probably been far more useful in the months before Jar Jar Binks reared his orange, floppy-eared head in that spring of 1999.

But then again, I saw The Phantom Menace nine times in theaters that summer, so I'm really not one to rant about how disappointing it was. All I can say is that fanboys work in mysterious, befuddling and sometimes embarrassing ways.
Posted at 10:48 PM
Email ThisBlogThis!Share to TwitterShare to FacebookShare to Pinterest
Labels: Movies, Star Wars, Wort Report Review