After nearly five years of semi-retirement, Eminem is back with a vengeance. His new album, Relapse, is a welcome return to form for the controversial rapper after sounding decidedly bored with his Slim Shady schtick on 2004’s Encore.

Fueled by horrorcore influence and backed by head-bobbing Dr. Dre beats, Em does a lot of venting on the album’s 15 songs (plus five skits) about his life-threatening addiction to prescription pills and other personal demons that have kept him out of the spotlight for the last few years. 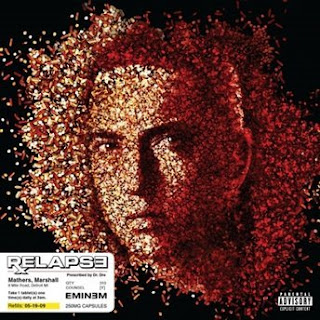 While his ex-wife Kim is spared from a lyrical lashing this time around, Em goes after his mother fairly early with “My Mom,” on which he places the blame for his drug addiction squarely on her shoulders. In the next track, “Insane,” Em accuses his step dad of molesting him as a child. He starts it off saying, “I was born with a dick in my brain/Yeah fucked in the head/My stepfather said that I sucked in the bed.” Wow.

That line between disturbing fact and even more disturbing fiction is often blurred in Relapse, which is likely completely intentional. In the opening song, “3 A.M.,” he recalls wrapping up his cousin in Christmas lights, throwing him in a bathtub, chopping him up and proceeding to drink his bloody bathwater. There’s an autobiographical element to this album, to be sure, but the layer of fictionalized serial killer brutality in his lyrics recalls a hip-hop version of Heath Ledger’s Joker from The Dark Knight (and, yes, the late Ledger and the circumstances of his death are brought up more than once in Relapse). This is twisted stuff, but we’re nevertheless intrigued.

In the album’s more introspective songs—namely “Déjà Vu,” in which he poetically recounts how his drug addiction impacted his relationship with his daughter Hailie—Em’s inner turmoil is far more tangible as he turns his trademark rage on himself in ways unseen since his 2000 sophomore album, The Marshall Mathers LP.

He gets particularly emotional in the self-produced and stripped-down “Beautiful,” which is a weirdly touching and borderline inspiring break from Em's usually violent, homophobic and misogynistic lyrical content.

Does Relapse ever go too far? Absolutely. Em spends too much time on this disc indulging in chilling, over-the-top rape and murder fantasies without the necessary South Park-esque satirical wink. It should be dark comedy, but often it’s just dark.

Em also takes aim at the late Christopher Reeve in “Medicine Ball,” which at this point is not only unfunny but played out. Em shrugs off such criticism, rapping, “Now everybody is pissed at me like it’s my fault/His name rhymes with so many words. Geez!” He then takes the role of the late Superman actor and allows Reeve to have the last word before challenging Em to a breakdancing contest.

While the bulk of the album is solid, lead-off singles “Crack a Bottle” and “We Made You” just aren’t very good and don't seem to fit with the rest of the album's material, particularly the latter. Yes, it's another goofy celebrity diss, but it's never a good sign when many your targets (Amy Winehouse, Sarah Palin) bowed out of the public eye months before the album's release.

It offends, sure. But that’s the point. Relapse isn’t Em’s best album, but his jaw-dropping, head-turning and at times stomach-churning rhymes are oddly refreshing in the artistically stagnating world of mainstream hip-hop.
Posted at 11:50 AM
Email ThisBlogThis!Share to TwitterShare to FacebookShare to Pinterest
Labels: Music, Wort Report Review