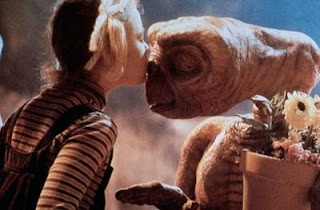 The National Enquirer recently reported that director Steven Spielberg and actress Drew Barrymore were secretly discussing a sequel to E.T: The Extra-Terrestrial. Thankfully, this just isn’t true. Your childhood memories are safe—for now at least.

As pointed out by Slash Film, the director guest edited the 20th anniversary issue of Empire magazine—now on sale—and said he has absolutely no interest in a sequel to the 1982 film. He writes in the letters to the editor section, “I’m never going to make E.T. II—E.T. is a closed story. It had a beginning, middle, and a definite ending, and we had nowhere to take it except to go home with him. Nor did I want to bring him back to Earth for a second time.” That's sound reasoning if I ever heard it.

Slash Film notes, however, that Spielberg was at one point interested in an E.T. follow-up called E.T. II: Nocturnal Fears, which would involve E.T. rescuing Elliott and his friends from evil aliens. Spielberg decided against this idea, saying it “would do nothing but rob the original of its virginity.”

So yeah, the National Enquirer was wrong. Shocker, right?
Posted at 4:49 PM
Email ThisBlogThis!Share to TwitterShare to FacebookShare to Pinterest
Labels: Movies