Okay, so you’ve seen the new Star Trek flick. What now? You could brush up on your Shakespeare with The Klingon Hamlet or, if made-up alien languages aren’t your thing, you can download Star Trek: D-A-C on Xbox Live Arcade. 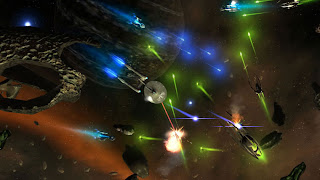 Inspired by the new J.J. Abrams film, Star Trek: D-A-C is a top-down space shooter that allows Xbox 360 gamers to wage war as either the Romulan Empire or the Federation in a variety of online competitive or co-op multiplayer game modes. Team combat supports up to 12 players at a time.

Players can choose between three ship types from each faction, including flagships, bombers and fighters. Federation players will be able to take the helm of the all-new U.S.S. Enterprise featured in the film.

Star Trek: D-A-C will run you 800 Microsoft Points ($10), which seems like a pretty good price for this type of shooter. But what do I know? Damn it, I’m a blogger, not an economist!
Posted at 5:45 PM
Email ThisBlogThis!Share to TwitterShare to FacebookShare to Pinterest
Labels: Movies, Star Trek, Video Games