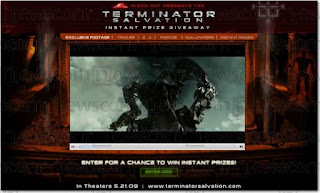 Wow, the new Terminator movie sure is cheesy. Warner Bros. Pictures is teaming with Pizza Hut to offer fans exclusive footage from the highly anticipated Terminator Salvation, which hits theaters May 21. The five-minute sneak peek is available on pizzahut.com from May 11-30.

The clip shows one of Skynet’s monstrous Harvesters in action and is pretty badass if you’re into giant robots and explosions. It also gives us a glimpse of a young Kyle Reese, played by Star Trek’s Anton Yelchin.

What’s even cooler is that on the day the film hits theaters, Pizza Hut is offering a free medium one-topping pizza to anyone named John or Sarah Connor. All you’ll need is a government-issued I.D. This promotion is too bizarre not to be considered universally awesome.

Free pizza at first seems like an odd way to support the future savior of mankind. Then again, I know that I’m never quite up to fighting for humanity without a slice or two.
Posted at 6:31 PM
Email ThisBlogThis!Share to TwitterShare to FacebookShare to Pinterest
Labels: Movies, Terminator