The Trouble with Terminators 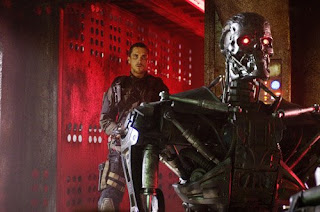 Remember how I said in my last post that I’d deem Terminator Salvation a success if it delivered “robots and explosions” and “a minimum of facepalm moments”? Well, the movie had plenty of robots (check) and a ton of explosions (double check). As for facepalming stupidity, well, they went overboard (check times three).

Don’t get me wrong, there are those of you out there who might enjoy Terminator Salvation and I won’t hold it against you if you think I’m being harsh toward this mindless summer popcorn flick. But summer movies don’t have to be this mindless—particularly when they’re cashing in on a beloved property like Terminator. To add insult to injury, the phenomenal television series Terminator: The Sarah Connor Chronicles was canceled just days before this overwhelmingly average sequel opened.

However, scorned fans can take comfort in the fact that Terminator Salvation opened in second place at the domestic box office over the Memorial Day weekend with $51.9 million, trailing behind Night at the Museum: Battle of the Smithsonian. The Associated Press reports that the Ben Stiller comedy toppled the machines, earning over $70 million.

If you’re still unsure as to whether or not Terminator Salvation is worth your cash, check out my review at Broken Frontier. If you’re clamoring for a night at the movies, you’re better off seeing Star Trek again.
Posted at 9:53 PM
Email ThisBlogThis!Share to TwitterShare to FacebookShare to Pinterest
Labels: Movies, Star Trek, Terminator