Crossing the Streams With Ghostbusters: The Video Game (Xbox 360)

It came, it saw, it kicked our ass! 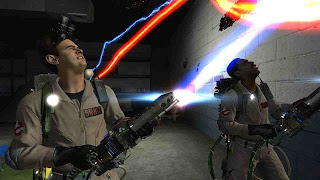 If you grew up with the Ghostbusters films, chances are you’ve already rushed out and purchased Ghostbusters: The Video Game to live out your childhood fantasies of strapping on a proton pack, hopping in the Ecto-1 and ridding Manhattan of pesky poltergeists. However, if you’re a skeptical ectoplasm aficionado who’s been burned far too often by movie adaptations in the past, you’ll be happy to learn that Terminal Reality’s Ghostbusters, while not a perfect game, captures the charm of the 1984 film (and its lesser but underrated sequel) and is a blast to play.

Part of what makes this game so enjoyable is that it’s essentially a third Ghostbusters film. Written by Dan Aykroyd and Harold Ramis—who join Bill Murray and Ernie Hudson to voice their respective paranormal investigators—the story is set two years after Ghostbusters II. You play as a rookie hired to test out Egon’s experimental equipment. Humorously and sensibly, your character is never given an actual name. Since you’re handling such dangerous gear, the guys reason that there’s really no point in getting too attached by learning your name. “Rookie” it is. 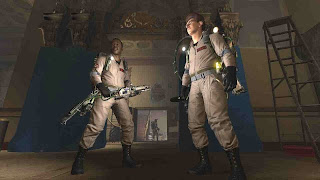 You might be disappointed that you never get to play as Peter Venkman (Murray), Ray Stantz (Aykroyd), Egon Spengler (Ramis) or Winston Zeddemore (Hudson) in the single-player mode, but it’s fun sitting back from an outside perspective and watching these iconic characters bounce off each other in some of the funniest dialogue you’re likely to find in a video game. Annie Potts returns as receptionist Janine Melnitz, retaining her sardonic wit, while William Atherton returns as reviled bureaucrat Walter Peck, who apparently still has no dick. (Well, that’s what I heard!) Alyssa Milano steps in for Sigourney Weaver’s Dana Barrett as Dr. Ilyssa Selwyn, the focal point of the story and Peter’s love interest. If you’re not happy with Dr. Venkman getting over Dana so quickly, back off, man. He’s a scientist. 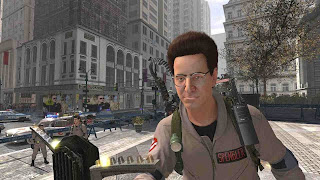 At the beginning of the game, Ray gives you some pointers on how to use your proton stream but, in your excitement, you accidentally unleash Slimer from the containment unit. He returns to his old haunt, the Sedgewick Hotel, and it’s up to you and the boys to re-capture the ugly little spud while causing a copious amount of collateral damage. Accidentally, of course.

Sound familiar? It should. The early sections of the game spend a lot of time rehashing characters and locations from the original movie. In the first few levels, you’ll face off against the gluttonous Slimer, the monstrous Stay Puft Marshmallow Man (now with creepy little marshmallow minions) and the New York Public Library’s Gray Lady. Things get a lot more interesting storywise once the game begins exploring new territory—including a jaunt through an alternate dimension—but I doubt any Ghostbusters fan will truly protest wrangling Slimer in the Sedgewick ballroom or reducing Mr. Stay Puft to sugary goop. Love for the films is what made you purchase this game in the first place; Terminal Reality is merely indulging you. 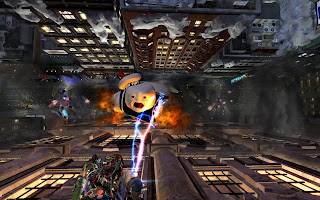 However, 1980s nostalgia would be pretty worthless if the game wasn’t fun to play. Controlling similarly to the Gears of War series, Ghostbusters is a third-person shooter with a twist. There are ghosts that can be vanquished simply by blasting them with your proton stream—or one of three upgradeable weapons on your proton pack—but a lot of the combat requires you to weaken, lasso and trap your opponents. This rhythmic gameplay component certainly had the potential to be repetitive, but it’s actually incredibly satisfying.

My favorite proton pack add-on is the slime blower, which is a slightly modified version of the one seen in Ghostbusters II. In addition to the standard hose, the blower has a “slime tether” function that allows you to solve puzzles and play around with the game’s impressive Infernal Engine physics.

Does it have flaws? Sure. Some of the voice acting is a bit forced, and, while this isn’t necessarily a hard game for seasoned vets, the difficulty ramps up at odd times and it becomes frustrating. That said, it’s eight hours of mostly solid gameplay that hardcore fans will want to revisit more than once. After finishing the single-player mode, a variety of multiplayer options will keep you coming back long after you help the boys once again save New York from total annihilation.

Ghostbusters could have easily been a run-of-the-mill movie cash-in title, but there’s a lot of love in this game. Terminal Reality clearly intended to craft a unique Ghostbusters experience and they’ve certainly succeeded. From the nuanced combat to the clever integration of gadgets such as the PKE meter to the chuckle-worthy dialogue, this is a game by and for the fans.

Is there a big difference between this and the Wii version?

From what I hear, the story is the same but the art style and controls are different.

Great review. Plus I love the one liners you seem to easily incorporate into your piece. Hopefully I'll pick this soon.