Developer Harmonix officially unveiled The Beatles: Rock Band on June 1 at the 2009 Electronic Entertainment Expo. Featuring an impressive song list—spanning the Fab Four’s entire career—in addition to key Beatles venues such as the Cavern Club, the Ed Sullivan Theater, Shea Stadium and Abbey Road, this latest installment in the popular rhythm game franchise looks to be every game-savvy Beatlemaniac’s dream. 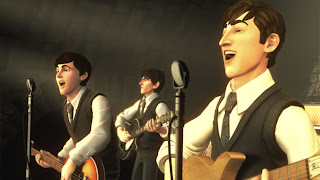 Gameplay should be pretty familiar to anyone who’s played Rock Band before, but this version includes, for the first time, three-part vocal harmonies. The game also boasts a campaign mode that allows fans to experience the Beatles’ entire career, from their humble beginnings in Liverpool to their final live performance on the roof of Apple Records in 1969.

As an added bonus for Xbox 360 owners, Microsoft will be offering “All You Need Is Love” as an exclusive download via Xbox Live on September 9. All proceeds will benefit Doctors Without Borders/Médecins Sans Frontières (MSF), an independent humanitarian organization that provides emergency medical care to more than 60 countries in need.

In addition to “All You Need Is Love,” more songs from the Beatles catalog will be available for future download to supplement the 45 tracks available on-disc, including the entire Abbey Road album.

I've a friend who is in the credits for TB:RB, and my jealousy abounds.