A Glimpse at Mickey Rourke in Iron Man 2 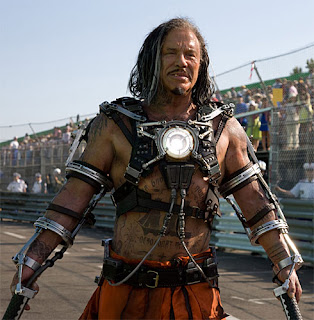 On June 9, Paramount Pictures released an early look at Mickey Rourke (Sin City, The Wrestler) as Iron Man 2 baddie Whiplash, who will face off against billionaire industrialist Tony Stark in Jon Favreau’s hotly anticipated superhero sequel. The publicity photo—now making its rounds on the Web—was originally published by USA Today.

In the accompanying article, Favreau explains that Whiplash, aka Ivan Vanko, is a Russian weapons designer who works for Stark’s competitor Justin Hammer (Sam Rockwell). He has created his own version of the Iron Man suit, complete with a pair of whips powered by a glowing chest piece similar to Stark’s.

"The technologies are definitely related," says Favreau. "That’s part of the core theme of the film."

Favreau explains that, in some ways, his ultimate vision for the character—an apparent amalgam of the Marvel Comics’ version of Whiplash and Iron Man villain Crimson Dynamo—was largely influenced by Rourke’s casting.

“It was very important that the villain be as compelling as can be. … Once I thought of Mickey in that role, it made me understand how to shape the story.”