In a recent interview with the BBC, Transformers: Revenge of the Fallen star Shia LaBeouf said that director Steven Spielberg has “cracked the story” for a fifth installment in the Indiana Jones franchise. The last sequel, Indiana Jones and the Kingdom of the Crystal Skull (2008), featured LaBeouf as Indy’s son, Mutt Williams, who may or may not headline future installments once Harrison Ford hangs up his fedora and whip. 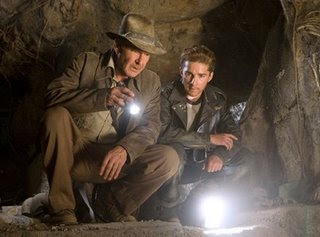 Fueling sequel speculation is producer Frank Marshall, who told Empire that Spielberg and series co-creator George Lucas are in the early stages of developing Indy 5. However, he says, nothing is “cracked” just yet.

“It’s really about the script,” Marshall said. “Once we see that, we’ll see. We’re not going to wait another 20 years. We’d all love to make another one. I’m anxious to hear the idea!”

He added, “We had a great time making the last one and, as Harrison said, we need to make this one soon. We're not getting any younger.” Ford will be 67 in July.

Further confirming that a sequel is in the works was a June 18 post on his Twitter page, in which Marshall wrote, “The story for Indy 5 is progressing. It is still in the research phase.”

Now, I don’t hate Crystal Skull. In fact, if you read my review last summer, I pretty much liked it when it hit theaters. However, unlike its predecessors, it doesn’t stand up to repeated viewings all that well. So why make another one? According to Box Office Mojo, Crystal Skull earned nearly $800 million worldwide during its theatrical run. I’d say that explains it.
Posted at 5:28 PM
Email ThisBlogThis!Share to TwitterShare to FacebookShare to Pinterest
Labels: Frank Marshall, George Lucas, Indiana Jones, Shia LaBeouf, Steven Spielberg, Transformers

It could get to the point where Indiana is in his 70s, battling Charlies in North Vietnam while trying to find a rare artifact. I may not like it, but chances are I'd still pay to see it. That's the affect the original trilogy had on me.