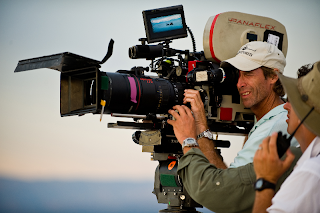 It was reported last week that pyrotechnic auteur Michael Bay would be leaving the Transformers series after the second film in favor of smaller, more personal projects. Wait, what?

“After the three-and-a-half years I've spent making these movies, I feel like I've had enough of the Transformers world,” Bay was quoted as saying. “I need to do something totally divergent, something without any explosions.”

Many news sources took this to mean that Bay is growing tired of blockbusters, but the director confirmed that the press is exaggerating. Without explosions and visual effects, wouldn’t his movies consist almost entirely of military fetishization, glistening half-naked women and product placement? Not that I’m complaining about glistening women, but this story doesn’t add up.

As reported by FilmDrunk, Bay revealed on his official message board that what he meant was that he needs time off from the undeniably demanding Transformers franchise to pursue other interests, not that he was abandoning action films entirely. He wrote, “Love press how they spin. Never said it—just wanted a vacation is more to the point.”

Phew. I was worried there for a second.