It’s old news that X-Men Origins: Wolverine leaked online on March 31—more than a month before the film’s theatrical release. But did you know that 20th Century Fox head Rupert Murdoch may have been indirectly responsible?

Let’s recap. After the film leaked onto the Internet, FoxNews.com showbiz columnist Roger Friedman reviewed the unfinished workprint. While Friedman’s review of the Fox-produced film was overwhelmingly positive, News Corp. accused him of promoting piracy and promptly fired him. He now writes for The Hollywood Reporter, and is filing a wrongful termination lawsuit against his former employer. 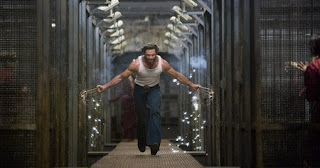 Friedman’s attorney, Martin Garbus, told the New York Daily News’ Rush & Molloy column that the pirated copy seen untold times through illegal online downloads can be traced back to Murdoch, who asked the studio to make him a DVD copy of the movie.

“Apparently, somebody made another copy for themselves,” Garbus said.

Friedman also claims that he was canned due to his frequent criticism of Scientology in his columns, citing a campaign spurred by Scientologist Kelly Preston—wife of John Travolta—to have him fired. While in Memphis attending the funeral of Isaac Hayes, a Scientologist, Preston allegedly saw Friedman at the Peabody Hotel and called him a “religious bigot.”

Friedman was later told to go easy on Fox’s Valkyrie, which starred noted Scientologist Tom Cruise. In addition, Friedman says his editors prohibited him from writing about the January death of Preston’s son, Jett. The Wolverine incident, Friedman charges, was the justification the company needed to finally give him the axe.

“I’ve seen how Scientology intimidates even the most powerful media,” said Garbus. “That seems to be what happened here.”

It’s baffling that this overblown fiasco is swirling around such a mediocre film.
Posted at 9:33 PM
Email ThisBlogThis!Share to TwitterShare to FacebookShare to Pinterest
Labels: Movies, Wolverine