Transformers: Revenge of the Fallen Scores More Than $200 Million in Five Days 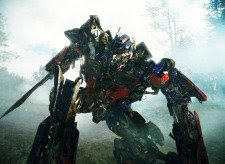 Hate it or love it, Transformers: Revenge of the Fallen raked in $108 million domestically over the weekend, earning $200.1 million since its June 24 opening, The Associated Press reports. The Michael Bay sequel had the second-best five-day gross of all time, trailing behind 2008’s The Dark Knight by just $3.7 million.

Despite being panned by critics, word-of-mouth on Revenge of the Fallen has been surprisingly positive. It seems as though most filmgoers are willing to overlook the film’s pacing, storytelling and continuity flaws in order to lose themselves the spectacle of it all. I wish I could join them.

It’s not that I hate this film. I still thoroughly enjoy the original Transformers and I think the action scenes in this installment are some of the best we’ve seen in quite some time. But it’s a fairly entertaining 90-minute film that’s stretched out to a mind-numbing two-and-a-half hours. And far too much of that time is dominated by pointless and often irritating filler material.