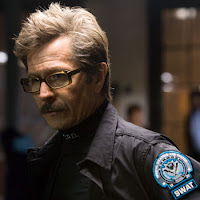 While promoting his new film The Book of Eli at Comic-Con International in San Diego on July 24, Gary Oldman—Commissioner Gordon himself—said that the next Batman film could begin shooting as early as next year for release in 2011, Entertainment Weekly reports. “You didn’t hear it from me,” he added. Warner Bros. has yet to comment.

However, Quint over at Ain’t It Cool News later caught up with the actor, who clarified that while he’s sure the studio is readying a sequel to The Dark Knight, it may take two or three years. This sounds like studio damage control to me.

Given the success of The Dark Knight last year, it’s odd that Warner Bros. is being so tight-lipped about the inevitable sequel. That said, it’s clear they’re not rushing things for the third film, which is usually where these superhero franchises start going south.
Posted at 12:25 PM
Email ThisBlogThis!Share to TwitterShare to FacebookShare to Pinterest
Labels: Batman, Gary Oldman, The Dark Knight