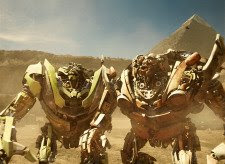 Over the Fourth of July weekend, box office newcomer Ice Age: Dawn of the Dinosaurs tied for first place with blockbuster smash Transformers: Revenge of the Fallen, with both films earning $42.5 million domestically since Friday, July 3, according to studio estimates and reported on by the Los Angeles Times. Dawn of the Dinosaurs grossed $67.5 million since its Wednesday opening, with Revenge of the Fallen raking in $65 million during that same time period. Overall, the Michael Bay-helmed Transformers sequel has earned $293.5 million in U.S. theaters since its June 24 release.

Michael Mann’s Public Enemies—starring Johnny Depp and Christian Bale—came in third with $26.2 million for the weekend and $41 million since opening Wednesday.

Worldwide, Revenge of the Fallen has earned a staggering $591.4 million, making it the biggest movie of the year in domestic and foreign markets. I think Bay just bought a new country: Explodistan.

7/6 Update: Actual studio figures released on Monday morning showed that Transformers: Revenge of the Fallen narrowly beat Ice Age: Dawn of the Dinosaurs for the top spot at the box office, earning $42.4 million compared to the latter film's $41.6 million (via The New York Times).
Posted at 8:00 PM
Email ThisBlogThis!Share to TwitterShare to FacebookShare to Pinterest
Labels: Michael Bay, Transformers