Marvel and Capcom Square Off on Xbox Live Arcade! 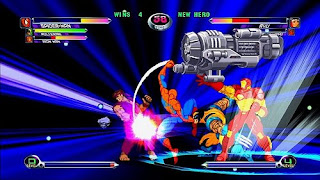 But why is this re-release of a nine-year-old game so hotly anticipated? That can probably be attributed to its robust character roster, featuring 56 fighters from the Marvel and Capcom ranks, pitting Street Fighter brawlers such as Ryu, Chun-Li and Guile against comic book icons such as Spider-Man, Captain America and Iron Man. Coupled with three-on-three tag-team gameplay and a control scheme that is as simple to learn as it is difficult to master, it’s easy to see why Xbox 360 owners have been clamoring for an update.

If you’re a longtime fan and aren’t too keen on spending more cash on a game you already own, consider that Capcom is likely testing the waters to see if the demand is there for a brand-new third game. After Street Fighter IV turned out better than we were all expecting, I think we can all get behind the idea of more Capcom fighting goodness.

PlayStation 3 owners will be able to purchase the title through the Playstation Network on August 13.
Posted at 11:20 AM
Email ThisBlogThis!Share to TwitterShare to FacebookShare to Pinterest
Labels: Capcom, Marvel Comics, Street Fighter, Xbox 360, Xbox Live