Based on the exhaustive Internet coverage of last weekend’s Comic-Con International, those of us who couldn’t make it to San Diego really didn’t miss out on all that much as far as movies go. James Cameron screened footage of his mysterious 3D sci-fi epic Avatar, while some fans caught a glimpse of Tron Legacy, the long-awaited sequel to Disney’s 1982 cult classic starring Jeff Bridges. In addition, Twilight enthusiasts were treated to two scenes from New Moon, which hits theaters November 20. Nothing all that groundbreaking or unexpected. 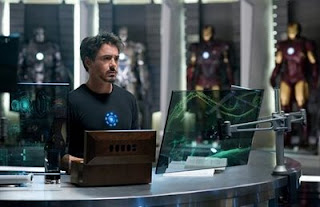 But the big news coming out of the con is that Jon Favreau’s Iron Man 2 is shaping up to be every bit as awesome as its 2007 predecessor, and that comic book geeks have plenty to look forward to as we near its May 7, 2010 release date.

Favreau and stars Robert Downey Jr. (Tony Stark/Iron Man), Scarlett Johansson (Natasha Romanoff/Black Widow) and Don Cheadle (Col. James “Rhodey” Rhodes) were on hand to premiere about five minutes of footage from the anticipated film, which showcased Samuel L. Jackson reprising his role as Nick Fury and Johansson slinking around as the sexy Russian spy. Fans also saw Mickey Rourke wreak havoc as the evil Ivan Vanko/Whiplash as well as shots of Rhodey suited up as the fan-favorite War Machine.

But Iron Mania certainly isn’t limited to the live-action film these days. Marvel Animation/Madhouse unveiled a trailer at Comic-Con for the upcoming Marvel Anime: Iron Man, penned by acclaimed comic book scribe and novelist Warren Ellis. Check out the clip below, and be sure to pick your jaw up off the floor when you’re done.

I didn't realize Warren Ellis is writing it! Now it's SURE to be awesome!