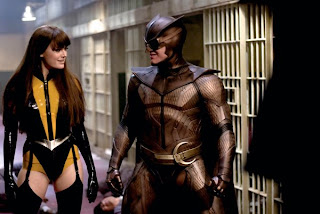 Most comic book aficionados have had July 21 marked on their calendars for some time now. If you haven’t, and if you’ve somehow missed all of the television and online banner ads, Watchmen: Director’s Cut arrives today on DVD and Blu-ray disc. This version features 24 minutes cut from the theatrical release along with a few video journals and a featurette called The Phenomenon: The Comic That Changed Comics.

However, if you’re a completionist (as most geeks surely are), there’s the Watchmen Ultimate Collector’s Edition on its way in December. That 5-disc set will include the director’s cut with the animated Tales of the Black Freighter woven in, as well as new commentary by Watchmen artist Dave Gibbons and film director Zack Snyder. It will also include Under the Hood—a faux documentary featured on the standalone Black Freighter disc already on shelves—as well as the complete Watchmen motion comic. If you haven’t purchased any of the supplemental Watchmen material released thus far, this seems to be the better deal.

While it performed poorly at the box office, I think Snyder should be commended for bringing this hard-to-film story to the big screen. It’s not perfect, but it’s a stirring deconstruction of superhero mythology that’s worth seeing whether or not you’ve read the graphic novel.
Posted at 2:30 PM
Email ThisBlogThis!Share to TwitterShare to FacebookShare to Pinterest
Labels: Watchmen, Zack Snyder

It seems like 75% of fans of the book disliked the film and 80% of people who saw the movie without reading the book disliked it because it wasn't a typical super hero movie. I loved it though, so I'll be picking this up on Blu-ray soon.