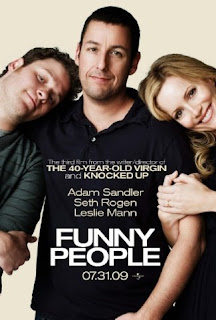 After seeing Funny People, the latest film by director Judd Apatow (The 40-Year-Old Virgin, Knocked Up), I was sure I enjoyed it. But I was also convinced that the film was poorly marketed. This is a drama about comedy—it’s not a comedy. That distinction is important, as anyone expecting the usual raunchy comedic fair from the Apatow crew is going to walk out of the theater severely disappointed. Does it have dick jokes? Sure. But Funny People is a film about an aging comedian coming to terms with a terminal illness. Superbad it ain’t.

The film stars Adam Sandler as George Simmons, a comedian who has made a name for himself churning out dumb comedies (the seemingly self-aware premise should be familiar to anyone who’s suffered through Little Nicky or You Don’t Mess with the Zohan). Moments into the film, George is diagnosed with a rare form of leukemia, and is put on an experimental drug regimen with an 8 percent success rate. Are you laughing yet?

In the midst of a deep depression, realizing that he has no close friends or family, George becomes nostalgic. He does a set at a club where he used to perform and crosses paths with Ira (Seth Rogen), a struggling young comic who works at a deli. George is impressed by Ira’s routine and asks him to write some jokes for him, laying the groundwork for the friendship that is the heart of this film. With Ira’s help, George reconnects with his loved ones, including his ex-fiancé, Laura (Leslie Mann). Things get complicated, however, when George’s treatment appears to be working. What will he do with this new lease on life?

Because this is a film about comedy, there are plenty of funny moments, mostly evolving organically from the entertaining chemistry between Sandler and Rogen. Jonah Hill and Jason Schwartzman are also great as Ira’s ball-busting roommates Leo and Mark, the latter of which is the star of Yo Teach!, a cheesy network sitcom. However, while there’s plenty to laugh at in Funny People, the humor isn’t really the point. As a comedy, this summer’s The Hangover is a far better film. But Funny People does have a subdued, introspective and very mature appeal. It also showcases how much Sandler has improved as a legitimate actor since his stint on Saturday Night Live in the early 1990s.

That said, Funny People’s primary flaw is that it’s about 20 minutes too long. Once George and Ira decide to spend the weekend with Laura and her two children—played by Apatow’s daughters Iris and Maude—the film meanders and loses focus. The introduction of Laura’s husband Clarke (Eric Bana) creates some necessary tension toward the end of the film, but the third act pacing issues make the film’s resolution less satisfying than it could have been. Apatow’s grown tremendously as a filmmaker, but he needs a more discerning editor.

Funny People is not for everyone, and you should probably avoid it if you’re in the mood to laugh. But it’s a worthwhile and occasionally touching film. If it ends up flopping at the box office, blame Universal’s marketing department.
Posted at 11:10 AM
Email ThisBlogThis!Share to TwitterShare to FacebookShare to Pinterest
Labels: Adam Sandler, Funny People, Judd Apatow, Seth Rogen