Yo Joe! Despite a decidedly frosty critical reception, Paramount’s G.I. Joe: The Rise of Cobra earned $56.2 million domestically during its opening weekend, according to studio estimates. The Associated Press reports that the film earned $44.3 million overseas, bringing its worldwide total to $100.5 million. 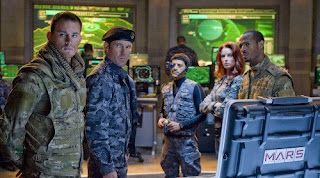 Based on overall harsh reviews for Transformers: Revenge of the Fallen—yet another Paramount film based on a Hasbro action figure line—the studio decided not to hold pre-release screenings of G.I. Joe for critics.

“The thing we saw from Transformers is that with these kind of movies, at times critics have a hard time getting their arms around them,” said Paramount vice chairman Rob Moore. “But the audience got exactly what it was. A fun summer movie, a great way to end your summer. You just relax and have a good time. You don't have to worry about global politics or global warming.”

While I’m not entirely in support of this “critics don’t matter” rationale, I will say that G.I. Joe is an exhilarating—albeit mindless—time at the movies and is a far better summer blockbuster than Revenge of the Fallen. It’s not necessarily a “good” film, but it’s a lot more entertaining than a lot of us thought it would be.

Look for my full review on Broken Frontier.
Posted at 8:43 PM
Email ThisBlogThis!Share to TwitterShare to FacebookShare to Pinterest
Labels: G.I. Joe, Transformers