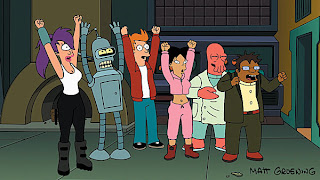 After extended (and allegedly heated) salary negotiations prompted 20th Century Fox to threaten replacing Futurama’s voice actors with sound-alikes, the original cast members will officially be reprising their roles when the show returns on Comedy Central in 2010, according to The Hollywood Reporter.

The principal voice cast—which includes John DiMaggio, Maurice LaMarche, Billy West, Tress MacNeille and Katey Sagal—had reportedly asked for several times what the studio was offering initially. While terms of the agreement have not been made public, the actors have apparently reached a financial compromise with Fox, surely to the delight of hardcore fans rallying against potential cast changes.

So not only are we getting more Futurama, but Fry, Bender, Leela, Dr. Zoidberg and the rest of the gang will sound as they should. As Professor Farnsworth might say, this is “good news, everyone!”
Posted at 7:38 PM
Email ThisBlogThis!Share to TwitterShare to FacebookShare to Pinterest
Labels: Comedy Central, Fox, Futurama