PS3 Slims Down for Slimmer Wallets 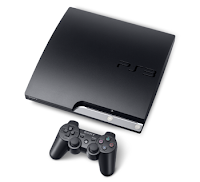 It’s about time! At its GamesCom 2009 Press Conference, Sony announced a game-changing price cut for the PlayStation 3, G4tv.com reports. While the slimmer $299 PS3 model sacrifices backward compatibility (the ability to play PS1 and PS2 games), it boasts a 120 GB hard drive.

Now that the PS3 actually has some great games in its library, including LittleBigPlanet, Metal Gear Solid 4 and inFamous, there’s really no reason for me not to pick one up now that it’s $100 cheaper. I was thinking of buying a Blu-ray player anyway—I might as well get one that plays games.

The PS3 Slim hits retailers September 1.
Posted at 11:09 AM
Email ThisBlogThis!Share to TwitterShare to FacebookShare to Pinterest
Labels: PS3