Tarantino Is Back With a Vengeance

Wow. Not only is Inglourious Basterds one of the best movies of the year, but it’s easily Quentin Tarantino’s most satisfying film since Pulp Fiction. As expected, this is a gritty and often brutally violent revisionist take on World War II. But, fortunately, its poignancy isn’t just measured in buckets of blood.

The most common criticism of Tarantino’s work is that his characters are excessively talkative, often at the expense of narrative momentum. This pacing issue was most apparent in 2007’s Death Proof, the second half of Tarantino and Robert Rodriguez’s Grindhouse double feature. While the film was meant to pay homage to exploitation films of the Russ Meyer variety, far too much of its running time is spent lingering on the meandering conversations of its female protagonists. Brilliant writing in Tarantino’s previous work had cemented him as one of the top American filmmakers of the 1990s, but those chatty sequences are boring more often than not, and the film suffers as a result. 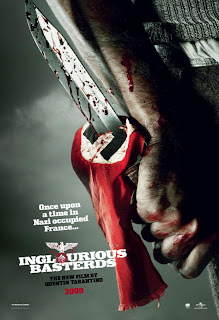 Flash forward two years and, yes, Inglourious Basterds—with an intentionally misspelled title paying homage to 1978 Italian war film, The Inglorious Bastards—is still loaded with long, protracted conversations. The film opens with a slimy German SS officer, Colonel Hans “Jew Hunter” Landa (Christoph Waltz), interrogating a French dairy farmer suspected of harboring a Jewish family. The scene is drawn out, and painfully so. But it’s through this lengthy interrogation that Tarantino ramps up the tension until the inevitable, violent payoff. There’s a ton of dialogue throughout this film—much of which is subtitled—but it’s seldom pointless.

Speaking of Landa, he’s easily one of the most memorable and despicable villains in screen history. This is a guy who truly enjoys watching people squirm, smiling all the while. Waltz’s unsettling performance is simply incredible throughout, and we’ll hopefully be hearing more about him once Oscar season rolls around.

But what of the film’s titular Basterds? Lieutenant Aldo Raine (Brad Pitt) leads a band of Jewish-American soldiers assembled to spread fear among the Nazi ranks by brutally murdering and scalping German soldiers. Put simply, they’re in the business of killing Nazis and, as Aldo explains, “business is a-boomin’.” Watching these characters get sweet revenge is a lot of fun, particularly when the so-called “Bear Jew,” Sergeant Donnie Donowitz (Eli Roth), goes to town on one Nazi soldier with a baseball bat. The film could have been all about Aldo and the Basterds running around the French countryside slaughtering Nazis and most filmgoers would probably be satisfied at a base level.

However, in typical Tarantino fashion, Inglourious Basterds juggles storylines. The film also follows Shosanna Dreyfus (Mélanie Laurent), a young Jewish woman who survives her family’s execution at Landa’s hand. Years later, she runs a small theater in Paris. There, she catches the eye of a German war hero, Fredrick Zoller (Daniel Brühl), the subject of Nazi propagandist Joseph Goebbels’ (Sylvester Groth) latest film. He convinces Goebbels to hold the film premiere—which will assemble all the top brass in the Third Reich, including Adolf Hitler—at Shosanna’s theater.

Shosanna and her lover Marcel (Jacky Ido) have an idea: during the premiere, they’re going to lock the audience in the theater and burn it to the ground. Shosanna’s plan mirrors that of the Basterds, who team with a German actress and undercover agent Bridget von Hammersmark (Diane Kruger) to infiltrate the premiere, destroy the theater and end the war. These storylines converge in a visceral finale that will likely have you talking long after the credits roll.

While Waltz is the standout performance in Inglourious Basterds, Pitt delivers as well. Tarantino’s dark comedy really suits this leading man, and I’d love to see Aldo revisited in a future film. Watching the native Tennessean wrestle with an Italian accent in front of Landa is a lot funnier than it probably should have been. Bravo.

After carving a swastika into a Nazi officer’s forehead at the end of the film, Aldo admires his work, saying “I think this just might be my masterpiece.” That last line in the script is clearly Tarantino patting himself on the back for a job well done, but he may be right. Inglourious Basterds is a solid, entertaining and often gut-wrenching piece of cinema.
Posted at 7:54 PM
Email ThisBlogThis!Share to TwitterShare to FacebookShare to Pinterest
Labels: Inglourious Basterds, Quentin Tarantino, Wort Report Review

I love this movie soooo much. Watching Brad Pitt butcher the language I spent 10 years studying was hilarious!