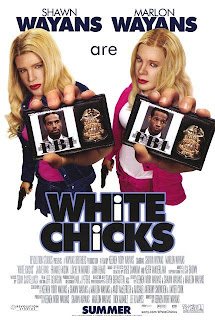 Okay, I’m probably being a bit melodramatic, but with Marlon and Shawn Wayans readying a sequel to White Chicks, I’m looking over my shoulder for the other two Horsemen of the Apocalypse.

According to The Hollywood Reporter, the Wayans Brothers will once again play FBI agents posing as, you guessed it, white chicks. Older brother Keenen Ivory Wayans will direct. Offensive racial humor will abound.

I gave Marlon a pass for his role in G.I. Joe: The Rise of Cobra, since he actually did a pretty good job with what he had to work with. However, I can’t imagine why we would need another installment in the White Chicks saga. The only question left unanswered in the first one? Why is this funny?
Posted at 11:32 AM
Email ThisBlogThis!Share to TwitterShare to FacebookShare to Pinterest